The Kansas City Chiefs have made another move in an attempt to fill the massive void left by Tyreek Hill, and have signed Green Bay Packers veteran Marquez Valdes-Scantling to a three-year deal.

On Thursday afternoon, ESPN Senior NFL insider Adam Schefter broke the news that the Chiefs looked to improve their wide receivers corps with the addition of 2018 fifth-round pick, and four-year NFL veteran, Marquez-Scantling.

“Former Packers’ WR Marquez Valdes-Scantling is signing a three-year, $30 million deal worth up to $36 million with the Chiefs, per source. This is called living right: Valdes-Scantling goes from the NFL’s reigning MVP Aaron Rodgers to the NFL’s former MVP Patrick Mahomes,” Schefter tweeted.

The signing is a necessary expense after the team parted ways with their superstar wide receiver Hill yesterday. After negotiations on a contract extension broke down, the team gave the six-time Pro Bowler permission to seek out a new home via trade. It was only a matter of hours before that suitor was found, and Hill was shipped off to the Miami Dolphins for a boatload of draft picks.

The addition of Marquez Valdes-Scantling follows the team’s signing of one-time Pro Bowler and Pittsburgh Steelers veteran Juju Schuster-Smith last week. During his four years in Green Bay, Valdes-Scantling has progressed into a strong WR3 option. His best season yet came in 2020 when he snagged 33 catches, for 690 yards, and six touchdowns.

However, last season the 27-year-old only played in 11 games and saw his numbers decline in every major category. He finished the year with 26 receptions, 430 yards receiving, and three touchdowns.

Considering the deal he was just given by the Chiefs, Valdes-Scantling will likely be the favorite to land the WR2 spot behind Schuster-Smith, and in front of Mecole Hardman. The wideout group will have a lot of ground to make up as they try to match the 111 catches, 1,239 receiving yards, and nine touchdowns from Hill in 2021. 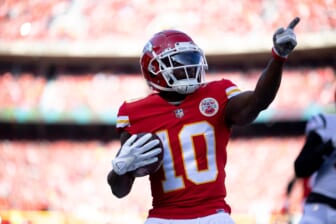