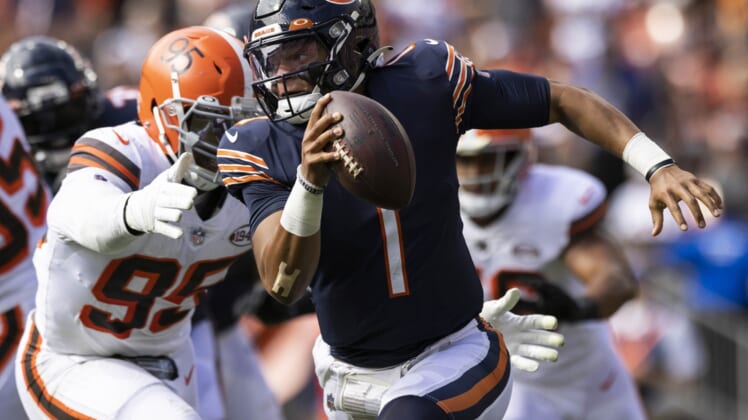 The Chicago Bears received the full participation of rookie quarterback Justin Fields at practice for the second straight day Thursday, easing concerns about his availability for Chicago’s next game against the Detroit Lions at home Sunday.

Justin Fields, the No. 11 overall draft pick in this spring’s draft, suffered a right thumb injury in his first career start against the Cleveland Browns last Sunday. The Bears lost 26-6 as Fields completed just 6 of 20 passes for 68 yards.

Several teammates have been impressed by his response to that outing.

“When you go through a day like we went through on Sunday, that’s tough on everybody, especially the quarterback and especially for your first start,” tight end Cole Kmet told the team site. “It’s been cool to see his attitude towards it and him wanting to get back to work this week. I’m still excited for him. He’s an unbelievable player and I think that’s going to show.”

The position, however, remains a mystery. The Bears’ previous starting quarterback, Andy Dalton, was limited Thursday with an injured knee, and Bears head coach Matt Nagy has expressed a preference for starting Dalton.

“Andy’s the 1, Justin’s the 2 and Nick is the 3,” Nagy said earlier this week. “The starter will be sorted out once we have a clearer picture.”