Juan Soto: ‘I would love to stay here’ with Washington Nationals 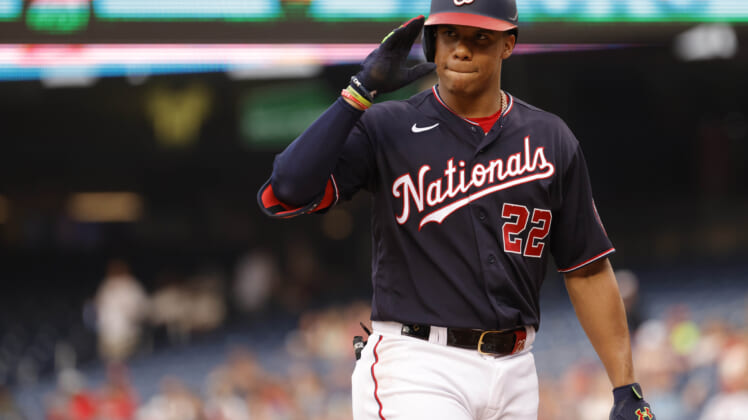 As MLB trade rumors continue to dominate the baseball landscape, we’ve seen several smaller deals, and even a blockbuster with Luis Castillo getting dealt. But the one trade everyone’s curious about is whether Juan Soto will get moved before the August 2 trade deadline.

Soto and the Washington Nationals have failed to see eye-to-eye in contract negotiations, with the superstar slugger rejecting a 15-year, $440 million contract with the organization a few weeks ago.

This has, in turn, sent the baseball community into a frenzy, with every fanbase wondering if they have the beans to spare for Soto. But, players of his caliber don’t come around often, and when they do, teams rarely, if ever, trade them.

Juan Soto is in no hurry to leave Washington

As for Soto, whose agency rejected the contract offer from the Nationals, which many have deemed to be well short of what he’s worth, he wants to stay in Washington. He briefly sat down with Ken Rosenthal to discuss the sudden trade rumors, and Nationals fans will like what he has to hear, in some ways.

As mentioned, Soto doesn’t make the decisions in Washington, but it’s crazy to think the team isn’t willing to pay one of the best players of our generation what he’s worth. You don’t want to be the team who trades a future Hall-of-Fame ballplayer, especially after he’s endeared himself to the fanbase, helping win a World Series in 2019.

Amazingly still just 23, Soto has several strong years ahead. Seeing him have success elsewhere is always going to sting. No matter who the Nationals get in return, they won’t be Juan Soto. The fact that he’s even on the trade block is ridiculous. This doesn’t even happen in video games, folks.

Who knows? Maybe there’s a scenario where Soto doesn’t get traded ahead of the deadline, and everyone can make up in the offseason, with the Nationals coming around by no longer being cheap with their young superstar.