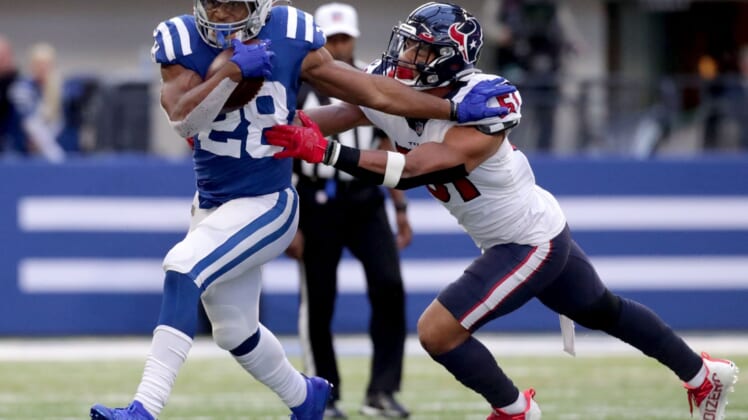 Indianapolis Colts running back Jonathan Taylor (28) pushes off Houston Texans outside linebacker Kamu Grugier-Hill (51) as he rushes the ball Sunday, Oct. 17, 2021, during a game against the Houston Texans at Lucas Oil Stadium in Indianapolis.

Carson Wentz threw two touchdown passes, Jonathan Taylor rushed for 145 yards and a pair of touchdowns and the Indianapolis Colts rode big plays to a 31-3 victory over the Houston Texans Sunday at Lucas Oil Stadium.

Taylor gained 139 yards and posted both of his touchdowns in the second half as the Colts (2-4) methodically pulled away from the error-prone Texans (1-5), whose losing skid reached five games. Houston committed three turnovers, two of which the Colts converted into scores.

Wentz passed for 223 yards and scoring strikes of 51 yards to Parris Campbell in the first quarter and 28 yards to Mo-Alie Cox with 11:50 left in the third, with the latter score following a Darius Leonard interception of Texans rookie quarterback Davis Mills. It marked the fourth consecutive game that Leonard recorded a takeaway, and the Wentz-to-Alie-Cox connection extended the Indianapolis lead to 17-3.

Campbell departed with a foot injury after his score capped the Colts’ second possession. Indianapolis pushed to a 10-0 lead early in the second quarter after Wentz found T.Y. Hilton for a 52-yard gain on a drive that culminated with a 41-yard Michael Badgley field goal.

Badgley signed with the Colts last Wednesday with Rodrigo Blankenship dealing with a hip injury that later landed him on injured reserve. Hilton made his season debut following preseason neck surgery and finished with four receptions for 80 yards, but exited early with a quad injury.

Taylor recorded the third play of 50-plus yards for the Colts with his 83-yard run to the Houston 5-yard line midway through the third. Taylor completed that drive with a 4-yard touchdown run for a 24-3 lead, and later added an 11-yard dash that completed the scoring with 4:47 to play.

It marked the second 100-yard rushing game of the season for Taylor.

Mills passed for 243 yards but tossed a pair of interceptions. Houston running back David Johnson fumbled to set up the second Taylor scoring run. Ka’imi Fairbairn kicked a 31-yard field goal in the second quarter to cap a 13-play, 62-yard drive for the Texans.