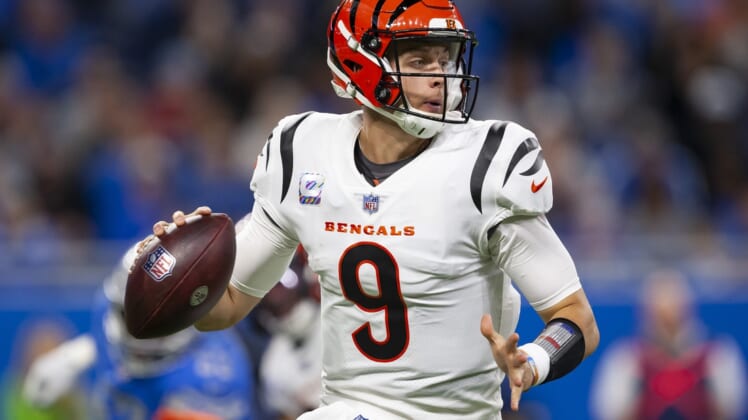 Joe Burrow tossed three touchdown passes to lift the visiting Cincinnati Bengals to a convincing 34-11 victory over the Detroit Lions on Sunday.

Mixon’s 40-yard touchdown reception came on a fourth-and-1 play early in the third quarter. He finished with five catches for 59 yards and also added 18 rushes on 94 carries for the Bengals (4-2).

Rookie Ja’Marr Chase redeemed himself after letting a ball go through his hands for an interception by making four receptions for 97 yards. He also provided a key downfield block on Mixon’s touchdown catch.

Jared Goff completed 28 of 42 passes for 202 yards for the Lions, with tight end T.J. Hockenson reeling in eight receptions for 74 yards. D’Andre Swift had 13 carries for 24 yards and a late touchdown to lead a Detroit rushing attack that finished with just 36 yards.

Cincinnati set the tone early as Burrows found Evans on an easy pitch and catch to open the scoring midway into the first quarter. The rookie running back beat Jalen Reeves-Maybin at the line of scrimmage and reeled in a 24-yard touchdown.

Chase hauled in a 34-yard catch along the sideline to set up Evan McPherson’s 38-yard field goal to give the Bengals a 10-0 halftime lead.

In the third quarter, Burrow rolled to his right and found an unmarked Mixon, who turned on the jets and benefited from Chase’s downfield block before finding the end zone.

McPherson tacked on a 40-yard field late in the third quarter before Burrow feathered a 2-yard pass touchdown to Uzomah early in the fourth.

Austin Seibert made a 35-yard field goal midway into the fourth quarter to end Cincinnati’s shutout bid. Seibert’s field goal in a lopsided game was met with sarcastic cheering from the faithful at Ford Field.

The Bengals clearly thought the game essentially was over as Brandon Allen relieved Burrow at quarterback on the ensuing possession. Allen tossed a 7-yard touchdown pass to Auden Tate to push Cincinnati’s lead to 34-3.