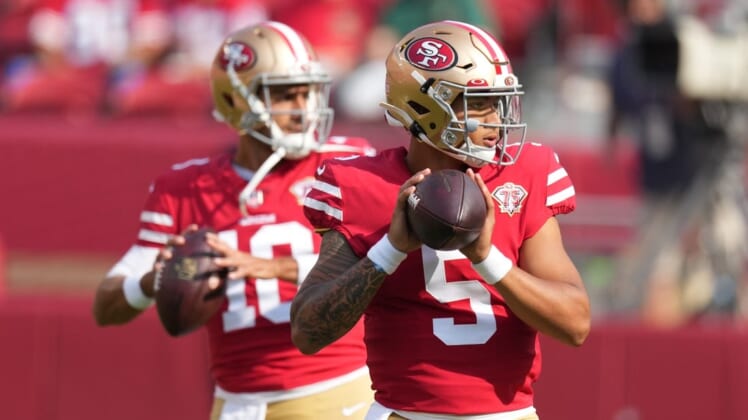 This is officially Trey Lance’s show. The San Francisco 49ers officially announced Tuesday that the team was moving in the North Dakota State product’s direction at the quarterback position.

Head coach Kyle Shanahan made that very clear when he met with the media.

The Trey Lance move has been apparent for a while

It hasn’t exactly been the best-kept secret across the NFL that the 49ers could be moving on from Jimmy Garoppolo sooner rather than later. With the number of reports surrounding the situation and how frequently Garoppolo being potentially traded was brought up on the rumor mill for several months, it almost seems like the official announcement out of San Francisco was much-delayed.

Lance has a high ceiling and brings a lot of intriguing tools to the table. There’s a reason the 49ers moved up to the No. 3 spot in the 2021 NFL Draft to select Lance. It wasn’t for him to sit on the bench for multiple seasons. The team takes somewhat of a risk moving on to a player who lacks experience. But it seems confident in its odds with the young quarterback.

Shanahan has said that Garoppolo would have been traded earlier if it weren’t for his shoulder injury.

Where Jimmy Garoppolo fits in the NFL

There have been times that Garoppolo has flashed, but he’s largely been passed off as more of a game-manager type. He’s also been tabbed by some analysts as more of a “system quarterback” than anything else. Considering how often the 49ers have run the ball and how little Garoppolo has taken shots down the field within this offense, it’s easy for people to pin the former label on him.

Some of those who have spent time around Garoppolo would disagree, though.

Garoppolo has seen time both in a starting role and a backup role. It remains to be seen as to which one he’ll fit into for the long-term. And it’s likely that he’ll continue to be among the NFL’s most polarizing players at the position through the remainder of his career.

Over the past three seasons, the lowest completion rate Garoppolo has posted has been 67.1%, which is plenty above satisfactory for any quarterback. It’s also reflective of just how solid his overall accuracy has been.

Garoppolo’s upper-body mechanics have always been impressive and do play a role into some of his success as a passer. He finished the 2021 season with a 68.3% completion rate, 3,810 passing yards, 20 touchdowns and 12 interceptions. While the touchdown-to-interception ratio could stand to improve and is among the worst he’s posted in his career, that’s a solid stat line otherwise.

His 12.7 yards per completion led the league and his 71.1% completion rate since Week 10 was second in the NFL. While wins aren’t a quarterback-specific stat, Garoppolo’s .702 win percentage ranks fourth-best among active NFL quarterbacks and is reflective of his ability to put his team in a good position when called upon.

At the same time, there’s been some stagnance on Garoppolo’s end looking at the numbers. The quarterback posted a respectable 86.6 overall Pro Football Focus grade in 2017, but has not graded out any higher than 80.0 since that season.

The floor for Garoppolo moving forward is that of a high-end backup. Regardless of whether he’s looked at as anything more than that for the rest of his career, this is a quarterback who should appeal to teams as a “safe” option and will find a destination outside of San Francisco.

The Seahawks have one of the most unstable and uncertain quarterback situations across the league, especially looking at the long-term. According to the NFLPA, the team has roughly $17 million in cap space and so it would require a scenario in which San Francisco took on some of Garoppolo’s $24.2 million base salary. This could be a situation where Seattle waits for Garoppolo to be cut as opposed to the two rival teams making a trade.

The Browns have more cap space than any other team in the league right now at $48 million, putting them in a solid position to acquire Garoppolo. And that may become even more of an area of need, depending on how any how long new quarterback Deshaun Watson is suspended for.

According to Mary Kay Cabot of Cleveland.com, the Browns are expected to look for a backup to Jacoby Brissett. At that point, adding Garoppolo to the fold becomes an even more appealing option and there’s a chance he could take over as the starter.

Garoppolo wouldn’t be considered a long-term answer in Houston, who could find itself in the mix for another quarterback in the 2023 NFL Draft. But it does give the team a bit of an insurance policy in the instance that second-year quarterback Davis Mills (who could ultimately show to be the team’s answer at quarterback) goes down with an injury. And having an experienced figure like Garoppolo as a backup is a positive for any young passer still learning the ropes.