San Francisco 49ers’ Kyle Shanahan: ‘We have moved on to Trey Lance’

An offseason filled with speculation surrounding the San Francisco 49ers’ quarterback situation came to an head on the opening day of training camp on Tuesday.

One day after head coach Kyle Shanahan made news by pretty much indicating that Jimmy Garoppolo has played his final game with San Francisco, he took it to a whole new level.

Appearing with general manager John Lynch on Tuesday, Shanahan confirmed what we pretty much already knew to be true. The keys to the kingdom have been handed over to second-year signal caller Trey Lance.

“This is Trey’s team,” Shanahan continued.

San Francisco exhausted three first-round picks to put itself in position to select Lance No. 3 overall in the 2021 NFL Draft. Once it fell short to the Los Angeles Rams in the NFC Championship Game, it appeared to be a foregone conclusion that Lance would take over.

Trey Lance and the future of the San Francisco 49ers

First off, San Francisco is still looking to find a trade partner to take on Garoppolo. He underwent off-season shoulder surgery, pretty much ending trade talks in the process. Now that Garoppolo has been cleared to practice, San Francisco gave him permission to seek a trade. If that doesn’t come to fruition, he’ll likely be released here soon.

A former star at North Dakota State, Lance entered the NFL after having accounted for 48 total touchdowns against one interception in college. He played pretty well in limited action as a rookie.

Despite this, there’s been some talk that Lance isn’t ready to take over for a championship-caliber team. He’s thrown all of 101 passes since the end of the 2019 season and had some mechanical issues as a rookie. 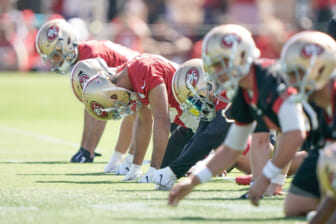 Even then, the San Francisco 49ers’ brass has made it clear Lance is ready to take over under center. For his part, the youngster pushed back against an off-season narrative that he’s not ready to take the keys.

For the most part, things were positive surrounding Lance’s performance in Santa Clara during off-season activities. He’ll have his first chance to prove himself in San Francisco’s preseason opener against the Green Bay Packers on Aug. 12.