Jimmy Butler put up career-high numbers during 2021 but fell short of expectations in the playoffs. What went right for Butler and what's next for him in Miami? 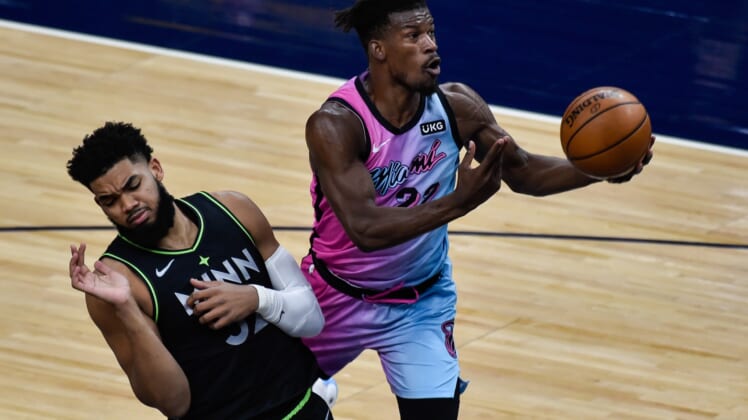 Jimmy Butler’s career-best season in the NBA didn’t end how he anticipated it to end, but after having essentially two seasons in one, it gives the Miami Heat a chance to give what they promised him during his free agency.

Butler averaged 21.5 points, 6.9 rebounds, 7.1 assists, and an NBA-leading 2.1 steals per game during the 2020-21 NBA season. The 31-year-old forward posted career-highs in rebounds, assists, and steals during his second season in Miami.

The Heat promised to give Butler the best chance at winning an NBA title and they will have that opportunity to find the correct pieces to surround him this summer. What went right for Butler during the season, and what does the future look like for Miami’s biggest star? 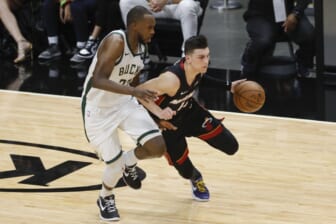 Jimmy Butler had the best statistical NBA season of his career

Other than scoring the ball, Jimmy Butler had career-high numbers in rebounds, assists, and steals, which is a positive when it comes to the future of the Heat. Butler accomplished all of this despite missing 10 games after testing positive for COVID-19 in January. There were many games where he showed that he can be the No. 1 player on a championship team.

The surrounding cast was the issue for Butler, as their offense was below average and inconsistent at times. At one point in the 2021 season, the Heat lost to the Wizards and Hornets, despite really good performances from Butler.

After Butler returned from his COVID-19 absence, he was a triple-double threat every single night. He went on a stretch where he had four triple-doubles in five contests, six games of 10-plus rebounds and double-digit assists in seven outings.

Although he started sluggishly in scoring in single digits in two of the first three games, Butler’s low in a game was 13 points on four occasions. That type of steady production is a testament to Butler’s consistency.

Butler scored 20-plus points in 30 of the 52 games he played during the 2021 season. However, Butler’s scoring efforts in the NBA Playoffs were not strong as he only scored a high of 19 points in Game 3 of the Bucks’ sweep over the Heat.

Perhaps, the effect of the NBA Bubble could have been a factor when it came playoff time. Three of the four teams that made it to the conference championships last year were bounced in the first round of this year’s playoffs.

Butler put Miami on his back many games during the regular season and could have used another scorer to help lighten the load. Victor Oladipo represented that opportunity, but he only lasted four games before a season-ending knee injury.

With a full offseason for him ahead, it’s not crazy to think he can be even better next year if the front office can surround him with the right pieces. Butler may not put up the same type of numbers, but his impact could be greater.

One of the few things overlooked in Jimmy Butler’s second season with the Heat is the improvement of his jump shot. All across the board, Butler improved from every distance compared to his first season with Miami.

Butler ended the regular season shooting the best two-point field goal percentage of his career at 53.8%. His previous career-high was 50.9% during the 2018 season with the Minnesota Timberwolves.

The biggest jump for Butler came from 16 feet to the three-point line. After only shooting 27.8% from this distance last season, it jumped over 8.0% to 36.2%. All of these numbers are trending in the right direction after a rough shooting regular season in 2020.

The NBA Playoffs were not pleasant for Butler as almost all of his numbers were significantly down outside of 16 feet to the three-point, including close to a 30.0% drop from 0-3 feet to 42.9% against the Bucks.

Butler should hopefully improve on these numbers even more next season when there isn’t as much on his shoulders when it comes to carrying the team. Overall, it was a nice bounce back after a below-average shooting season in 2020. 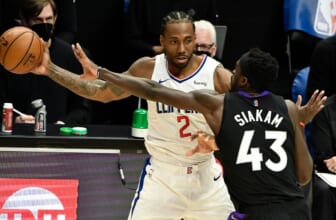 What’s next for Jimmy Butler and the current Miami Heat roster?

Jimmy Butler wasn’t the entire reason why the Heat were swept in the first round by the Bucks, but when your superstar player isn’t playing well, there isn’t much you can do about it.

The whole team seemingly wasn’t playing even close to their best basketball, which was evident after Miami lost by 17-plus points in three straight games to end the series. They weren’t even close to good enough offensively to compete.

There are only six players, excluding team options, that are under contract for next season. Jimmy Butler, Bam Adebayo, and Tyler Herro are the only players under contract that were in the playoff rotation.

The other three players are Precious Achiuwa, KZ Okpala, and Omer Yurtseven. None of them were in the rotation at the end of the year, and Yurtseven is the oldest at 23.

If the past has given us any indication of what’s to come, the Heat are most likely heading to a significant roster shakeup outside of Butler and Adebayo after Pat Riley gave the team a chance to run it back.

There’s also the topic of Butler wanting a four year, max-contract extension that would make his contract the following.

The Heat are reportedly willing to offer Butler this extension, which is absolutely the right thing to do for the team. It took Miami a while to sign its next star player, and the organization needs to keep him happy.

Butler’s contract extension wouldn’t affect the cap space the Heat have going into this summer. The deal wouldn’t go into effect until the 2022-23 season. The end of his deal would give him $50.245 million in 2026, but it’s worth it to give him an extension.

The Heat need to go into the luxury tax during Butler’s inevitable contract extension. Bam Adebayo’s max contract will also be in effect when next season begins, so it’s time to find the pieces to surround Butler and Adebayo for another NBA Finals run.

It all starts this offseason, which is expected to be one of huge changes and signify the end of the current Heat build. 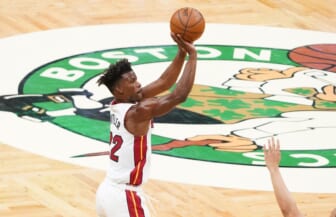