Jimmy Butler and the Miami Heat are coming off a disastrous series sweep at the hands of the Milwaukee Bucks in the first round of the NBA Playoffs.

After a ho-hum regular season for Miami, some thought it would be in a position to compete with Milwaukee and make a run in the Eastern Conference following an NBA Finals appearance last season. That did not happen.

Miami lost the four games by an average of north of 20 points. For his part, Butler averaged just 14.5 points on 30% shooting in a career-worst playoff performance.

This has not stopped Butler from reportedly looking for a max contract extension during the summer. At the very least, that’s what Anthony Chiang of the Miami Herald reports.

Said extension would come in at $181 million over four seasons with Butler earning north of $40 million each year. Here’s a look at three reasons why Miami should push back against this.

Jimmy Butler is on the back end of his prime

At 31 years old, Butler probably has two years remaining in his prime. Signing the All-Star to a four-year extension would take him into his Age-36 season. In fact, he’d be earning $50.3 million in 2025-26. That has the potential of being an albatross of a contract.

It’s also important to note that Butler has not played more than 65 games in a season since the 2016-17 season. We’re not saying he’s injury plagued. But this has to be part of the Heat’s decision-making process. As we’ve seen with LeBron James and other veterans, injuries are more prevalent for NBA players the older they get.

The Miami Heat are not NBA title contenders

One thing became clear this past season. Miami’s run to the NBA Finals in the Orlando bubble during the 2019-20 season was an exception to the rule. As currently constructed, these Heat are not legitimate title contenders. That became obvious during the aforementioned series sweep at the hands of the Bucks. 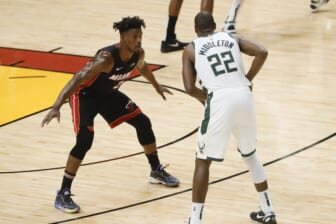 Also Read:
3 reasons why the Miami Heat were swept by the Milwaukee Bucks

This isn’t to say Jimmy Butler can’t be a top-end option for a contending team. Rather, committing a max contract to him would handcuff front office head Pat Riley. Given how aggressive Riley has been in recent years, he might want options moving forward. Signing Butler to an extension would disable these options.

If the Heat don’t sign Butler to an extension, it’s more than likely that he’ll opt out of his contract following the 2021-22 season and become a free agent. Miami already has enough flexibility this summer to sign a max-contract player. However, it might opt to push that cap room to the 2022 offseason with numerous star NBA players becoming free agents. It’s an epic list. 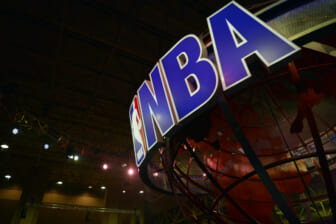 If the Heat are working under the assumption that this iteration of the team is not a title contender, it might make sense to run things back with Butler leading the charge in 2021-22.

Barring a surprising title run, this would enable Miami to potentially form a super team in the summer of 2022. Signing Jimmy Butler to a max contract extension would throw that idea out the window.