Vladimir Guerrero Jr. hit two of his three homers in consecutive at-bats off Gerrit Cole and withstood his hand getting stepped on during a play at first base as the Toronto Blue Jays beat the New York Yankees 6-4 Wednesday night at Yankee Stadium.

George Springer hit the tiebreaking single off Jonathan Loaisiga with two outs in the seventh. Springer delivered after the Yankees were unable to turn a double play on Santiago Espinal’s grounder off Chad Green (0-1). Second baseman Gleyber Torres could not get the ball out of glove quickly enough.

Before Springer’s fourth RBI of the series, Guerrero recorded his eighth career multi-homer game with a solo drive in the first and a two-run shot in the third. He then extended it to his second career three-homer game with a 443-foot drive to left on the first pitch of the eighth off Loaisiga. 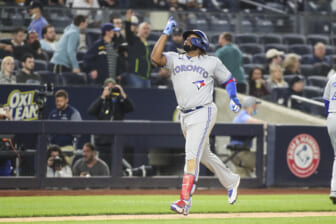 Guerrero went 4-for-4, having also doubled in the sixth inning.

Anthony Rizzo and Aaron Judge homered on consecutive pitches in the fifth off Jose Berrios. DJ LeMahieu hit a game-tying double later in the inning, and Torres homered in the eighth.

In between homers, Guerrero nearly exited in the second.

Aaron Hicks hit a ground ball to shortstop Bo Bichette, who cut in front of second baseman Espinal. Hicks legged out the infield single and stepped on Guerrero’s right hand at first.

Guerrero’s right ring finger started to bleed, and it appeared he might exit. After a few minutes, he got the finger taped up in the dugout and stayed in.

Guerrero then made it 3-0 when he drove Cole’s 98 mph fastball over the left-center field fence.

Guerrero’f first blast came three batters into the game. He hit a drive to center and Hicks attempted a leaping catch. Hicks was unable to make the play and his glove appeared to push the ball onto the netting in front of Monument Park. An umpire review upheld the call of a home run.

Blue Jays starter Jose Berrios allowed three runs on six hits in five innings. Adam Cimber (2-0) got three groundouts in the sixth, Trevor Richards retired pinch hitter Giancarlo Stanton on a long flyball to end the eighth, and Jordan Romano converted his fourth save with a scoreless ninth, giving up only a single to Rizzo.

Cole allowed three runs on four hits in 5 2/3 innings. He struck out five and walked one.