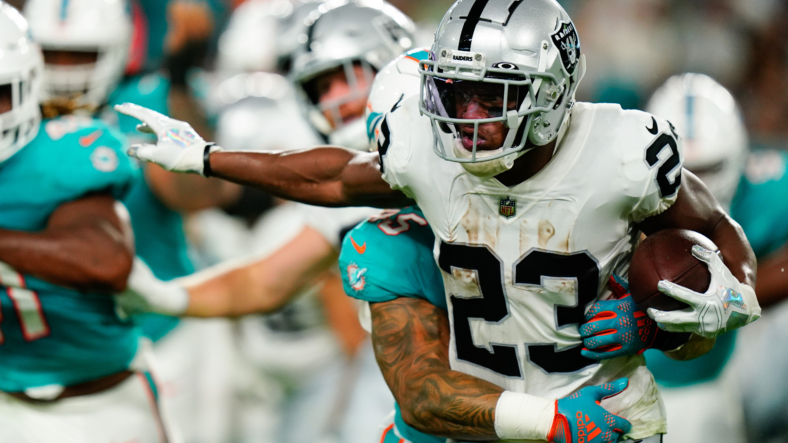 For those fantasy football players banking on J.K. Dobbins to be the Baltimore Ravens‘ bellcow early on, they may want to peer in on the latest report from Ian Rapoport. With Dobbins ruled out for Week 1, and possibly longer, the NFL Network insider suggested the team signed running back Kenyan Drake to actually be the team’s starting tailback.

Of course, Lamar Jackson will always be the top threat in the Baltimore offense, but unless or until the team goes to more of a pass-heavy approach, the starting running back will always be in high demand. According to Rapoport, that player just might be Drake.

Drake, who was recently released by the Las Vegas Raiders after a season with the team, is a year removed from a 955-yard, 10 touchdown effort in his lone season with the Arizona Cardinals.

Health of J.K. Dobbins’ ACL could lead to big year from Kenyan Drake

Surely head coach John Harbaugh doesn’t want to rush his young running back to return earlier than expected. After Dobbins tore his ACL in Week 10 of 2021, he could take a while to return to top form. Maybe that’s what we’re seeing with his Week 1 absence.

Either way, there’s no guarantee he quickly regains his juice and agility. As we’ve seen from other backs returning from a torn ACL, like Saquon Barkley, sometimes it takes a full season to get back to normal.

Maybe that’s what the Ravens are anticipating this season with Dobbins, which could lead to Drake earning a significant target share, not only on Sunday, but for the remainder of the season. The Ravens also have veteran tailback Mike Davis on the depth chart as well.