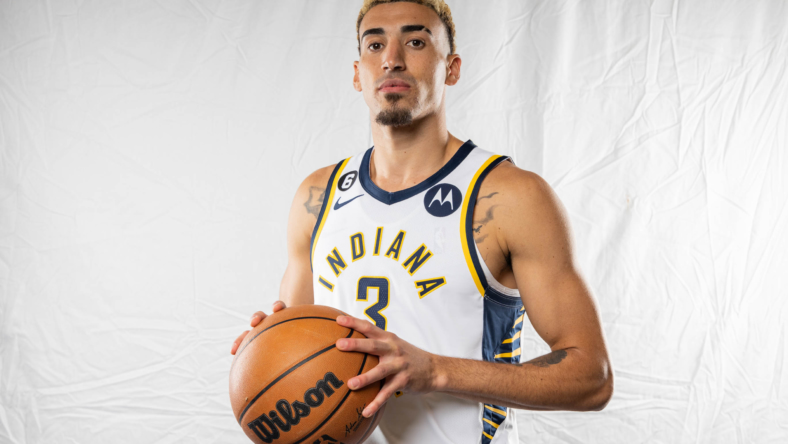 The Indiana Pacers season is underway and their start has been a bit surprising. They are 3-5 on the year and if the playoffs started now, they would be a half-game back from being in the play-in tournament. They’re actually ahead of a couple of much more talented teams like Brooklyn and Charlotte.

One player who has gotten off to a slow start this season is Chris Duarte. Last season he had a really great year for the Pacers. The hope was that he would be able to build off of that this upcoming season.

There is still time for that to happen as the season is still young, but the Indiana Pacers may need to ponder a world with Duarte on another bench.

A minutes decrease has hurt Chris Duarte in 2022

There could be any number of reasons why Chris Duarte’s gotten off to a slow start. There are a couple that stands out as bigger reasons why. To date, his minutes have been inconsistent as he’s been getting around 21 minutes per game. This is down from the 28 minutes he was receiving last season.

It’s led to him attempting at least three fewer shots per game too. His overall effective field goal percentage hasn’t changed too much, from 51% to 50%. Another reason is that teams are better aware of what he brings to the floor. Therefore, they are game-planning for him more than last season. This might be the biggest reason for his slow start, as it’s fairly common for this to happen as rookies move to sophomores.

It’s been well-documented that Duarte is “old” in NBA terms. He is the sixth oldest player on the roster and he’s only 25. The message from the Pacers is that they are rebuilding and are looking for players that fit their timeline. The current average age for the Pacers is 24 years old.

Their main core players of Tyrese Haliburton, Benedict Mathurin, and Jalen Smith are all 22 years old or younger. And considering Mathuring and Haliburton look like stars, Duarte’s role could decrease some. So, at 25 he might be right on the cusp of being on the same timeline for the Pacers. And considering this team has some veterans who might be more inclined to win a championship now, pairing Duarte with them in a trade makes sense. For example, James Johnson is 35 years old, a 14-year vet, and has only been to the playoffs seven times. As the trade deadline approaches the playoff and veteran experience might become more attractive. However, he may not bring back a return that interests the Pacers. If Duarte is included it could bring in a better return.

Duarte could eventually have no worthwhile role in Indy

Another reason why moving Duarte makes sense is that the Pacers will continue to get younger. Currently, they have three first-round draft picks for this year’s draft. And when looking at the needs of the Pacers it’s clear they need another wing player. If you factor in Duarte’s age it’s possible he is the player who gets squeezed from the rotation. He has long been pegged to be a team’s, sixth man. Now, Duarte has shown he is an NBA player and teams would want a player like him. So, this isn’t to say the Pacers need or should trade him. Just that they should consider the idea of moving him.