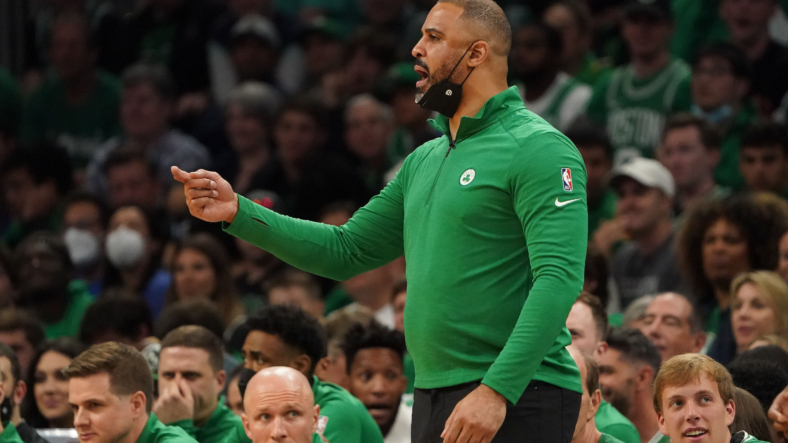 Boston Celtics head coach Ime Udoka is the latest big-name individual around the NBA to find himself mired in a scandal. Late Wednesday night, reports surfaced that Udoka was facing discipline from the Celtics for an unnamed violation of team policy, including a lengthy suspension.

Other reports came out indicating that Udoka allegedly took part in a sexual relationship with a female member of the Celtics’ staff. Then on Thursday, ESPN’ Adrian Wojnarowski reported that Udoka will indeed be suspended for the entire 2022-23 NBA season.

“Boston Celtics coach Ime Udoka is likely facing a suspension for the entire 2022-2023 season for his role in a consensual relationship with a female staff member, sources tell ESPN. A formal announcement is expected as soon as today.”

At about the same time, suggestions surfaced that Udoka could very well opt to resign instead of serving said suspension. Apparenty, that’s not the case. Chris Haynes of Yahoo! Sports reports that Udoka has no intention of resigning and is waiting for the official suspension to be handed down.

Legal battle could be looming between Ime Udoka, Boston Celtics

Months removed from leading Boston to a surprise NBA Finals appearance in his first season as the team’s head coach, Udoka’s future with the Celtics is now in question.

Some have rightfully raised the point that if Udoka’ alleged wrongdoing was bad enough to warrant a season-long suspension, why didn’t Boston simply fire him?

While the head coach’s job is not seen to be in jeopardy, there’s an open question whether he will take this suspension without a fight. If not, we could be looking at a prolonged legal battle between the two sides. Though, that would obviously come after the head coach and his organization parts ways. Right now, there’s no indication that this is going to happen.

Either way, the scandal involving Ime Udoka and the defending Eastern Conference champions is not going to die down with roughly a month to go before the start of the regular season.