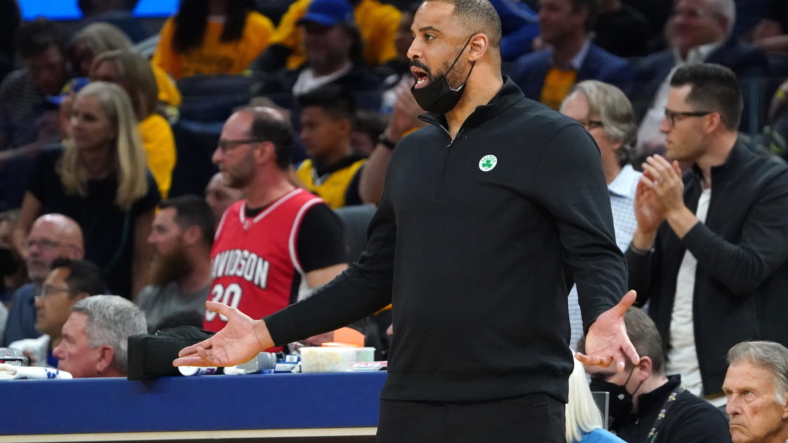 Boston Celtics head coach Ime Udoka is coming off a brilliant first season in that role, leading the organization to a surprise trip to the NBA Finals.

Part of the Gregg Popovich coaching tree, there’s been nothing but good things said about the 45-year-old former player around the NBA.

That’s what makes this late-breaking news so surprising. According to ESPN’s Adrian Wojnarowski, Udoka is facing a lengthy suspension and other disciplinary action for allegedly violating organizational guidelines.

“Boston Celtics coach Ime Udoka is facing possible disciplinary action – including a significant suspension – for an unspecified violation of organizational guidelines. Discussions are ongoing within the Celtics on a final determination.”

As breaking news, information continues to come out on what happened behind the scenes. According to Shams Charania of the Athletic, Udoka’s likely suspension is due to him allegedly having an inappropriate relationship with a female staff member.

Udoka has been with actress Nia Long since all the way back in 2010. The two are engaged and have a couple of children together. Rumors of this being the reason behind Udoka’s likely suspension heated up on social media following the initial report Wednesday evening.

A former star in the NBA, Stoudamire is currently Udoka’s lead assistant in Boston. He joined Udoka last season and was a teammate of his with San Antonio back in 2008-09.

Most recently, Stoudamire served as the University of Pacific head coach from 2016-21. He was previoously an assistant with the Memphis Grizzlies at the NBA level.

With Boston seen as a legitimate NBA title contender, this situation is huge. We will obviously have further updates as soon as they become available.