How tall was Andre the Giant?

Jason Burgos
A statuette of a young André the Giant, and a signed photo reside on a shelf as part of Chris Owens' collection at his Groveland home. Andrethegiant06

How tall was Andre the Giant? How much did Andre the Giant weigh? These are questions people immediately wonder when they see photos and videos of André René Roussimoff, or the individual aptly nicknamed “The Eighth Wonder of the World.”

While the actual numbers varied over the years because of entertainment promotion and age, there is no doubt that the pro wrestling legend was no normal-sized human being.

How tall was Andre the Giant?

Although the native of Coulommiers, France will not go down as the tallest performer to ever grace a WWF ring — that honor goes to Jorge “Giant” Gonzalez — he will rank as one of the tallest ever at an immense 7’4″. Professional wrestling has always been known for having larger-than-life characters, but none embodied that more than Andre the Giant.

Despite being in an industry chock full of people that would stand out in a crowd, he was still a colossus among giants. It’s why he has only been beaten a handful of times during his illustrious wrestling career. 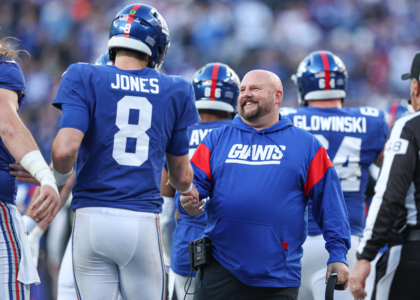 In a fictional world of pre-determined fights, and David’s overcoming Goliath all the time, imagining anyone beating the behemoth known as Andre the Giant was far-fetched even for the fantastical realm of professional wrestling.

What was Andre the Giant’s weight?

When Andre the Giant became a pro wrestler at 18 in 1964, he looked far different than the monstrous 520-pound Gollum that gave kids nightmares when he was Hulk Hogan’s nemesis in the lead up to their legendary bout at Wrestlemania III.

In his youth, he was a lean and svelte athlete who likely would have been on a basketball court dunking on other Frenchmen if he had grown up a few decades later.

However, because of his unique size, he quickly became a renowned star in the circus world of pro wrestling. And with fame comes money, and money comes excess. Some of Andre the Giant’s favorite extracurricular pleasures were alcoholic beverages and food.

Legend has it that Andre the Giant could eat 12 steaks and 15 lobsters in one sitting, and then wash that down with upwards of 24 cans of beer.

It’s a stunning amount of alcohol at one time, but by drinking that much booze he was not only filling the belly of a gigantic individual but also trying to drown out the intense joint pain he developed from being as large as he was.