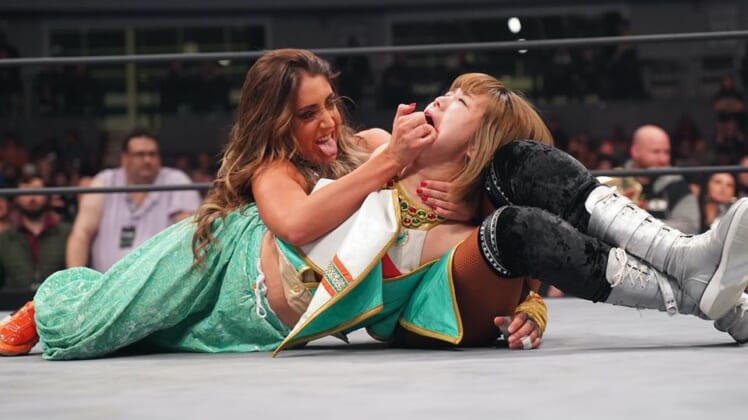 Since announcing it would be broadcast on national television every Wednesday on TNT in 2019, All Elite Wrestling women have been the talk of the town in the professional wrestling world.

Debuting on October 2, 2019, All Elite Wrestling has been lauded by many wrestling fans as the future of professional wrestling and the best weekly wrestling show you will watch. It’s important to note that AEW has also been harshly criticized by WWE purists as a promotion that’s doomed for impending failure. Weekly ratings have shown the AEW audience is improving and they have defeated the WWE-led NXT brand almost every week in the head-to-head ratings.

So what have ween seen from AEW the past six months? My six month report card for All Elite Wrestling will be written in five separate articles covering the women’s division, men’s division, tag team division, announcers, and future stars.

First, let us take an objective look into the All Elite Wrestling Women’s Division over the past 6 months.

Week after week, we are subjected to the sloppiest, boring, and all-around bad matches that comprise the AEW Women’s Division. To be fair, the ladies representing AEW are mainly young and developing performers. Putting green performers on national television leads to a weak and exposed division of poor performances.

Listen to the Podcast

Trouble from the start

Right from the beginning, AEW has booked the women’s division backwards. Instead of putting the most marketable performer as their champion, AEW decided to put the title on a 21-year-old Japanese performer named Riho. Making Riho the choice as the leader of the women’s division at AEW was a real head-scratcher. The first AEW Women’s Champion speaks no English, is minuscule in size, and a sloppy performer. Since losing her title to Nyla Rose, she has been relegated to AEW Dark and is losing weekly to wrestlers how have seen little or no television time at all. The Riho experiment was a colossal failure and shouldn’t be revisited any time soon.

Looks can be deceiving

From first glance, Dr Britt Baker, D.M.D. was the correct choice to be the inaugural AEW Women’s Champion. Baker was highlighted by AEW as a “major free agent signing” before a television deal was even announced and seemed poised to be their first women’s champion. Thankfully Baker’s title run never came to fruition. Week after week she has been exposed as a dreadful and dangerous in-ring performer and her promo skills are weak at best. Good news is Baker is only 28 years old and has been slowly improving her in ring and microphone skills. Only time will tell if Dr. Baker can become a future star in All Elite Wrestling.

It has only gotten worse

The icing on the cake for how bad the AEW Women’s Division is current champion Nyla Rose. The sloppiest and most dangerous worker in the AEW Women’s Division is “The Native Beast.” Rose has a tremendous backstory and became the first transgender wrestler to win a title in a major American promotion when she won the AEW Women’s World Championship.  Unfortunately, Rose has displayed an extremely vile personality on social media making her unlikeable to many. The current AEW Women’s Champion possesses ring skills that are abysmal at best and is one of the weakest workers on the microphone. Quite simply, Rose is a place holder for the women’s title. At 37 years old, time isn’t on the side of “The Native Beast” to improve her in ring skills and microphone skills.

There is some hope

There is potential in a few performers competing in the AEW Women’s Division. Sadie Gibbs and Bea Priestly are strong wrestlers and have tremendous athletic abilities. Both ladies are consistently used in Japan and across Europe and have trained extensively in various wrestling styles. They have been used very little in AEW but they have unique look and skills that make them very marketable globally.

Another tremendous performer that has been used a lot recently is veteran Hikaru Shida. Since being on weekly television, Shida has proven to be the best overall performer in the AEW Women’s Division. Fans have grown fond of her work and she seems to be the next in line for current champion Nyla Rose. If booked correctly, Hikari Shida will be an excellent AEW Women’s Champion and is the most logical choice to unseat current champion Nyla Rose.

Keep your eyes on

With time and seasoning, Penelope Ford and Kris Statlander could be breakout stars. They both have displayed decent skills in the ring and have developed some connection with the fans. Both need work on their characters and in ring skills but they could be very big stars over time if developed correctly. Ford and Statlander need lots of time to grow in the ring, develop their characters, and gain comfort in front of large audiences. It will be interesting to watch both ladies develop over time and see if they can become a major force in the AEW Women’s Division over time.

Time and seasoning will be the test for the ladies in All Elite Wrestling. With a few veteran signings and good coaching, the AEW Women’s Division can become much better than what we are seeing presently. The veteran staff at AEW and bright minds behind the scenes will fix the hiccups we have seen thus far with the women’s division. I predict over the next 6 months we will see a slow and steady progression in this division that will make it much more interesting and watchable.