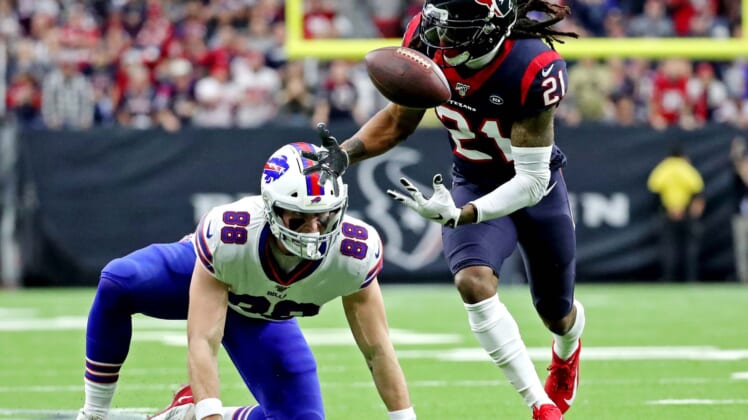 The Houston Texans sit at 1-6 on the season and going nowhere fast heading into their Week 8 bye. They just fired head coach and general manager Bill O’Brien. The Texans lack draft picks. It’s led to rumors that they will look to trade some veteran players ahead of the Nov. 3 deadline

According to Albert Breer of Sports Illustrated, the Texans have told other teams that only four players are off limits. That includes Deshaun Watson, J.J. Watt, Laremy Tunsil and Tytus Howard.

This means that the rest of the Texans’ 53-man roster could potentially be had in trades over the new few days. That’s sure to lead to a ton of rumors in Houston moving forward.

Here’s a look at four players the Texans could trade and potential landing spots.

Rumors continue to persist on this front. The latest suggestion is that Houston is willing to trade Fuller. Unfortunately, offers have not been up to the team’s liking. That could complicate things moving forward.

What we do know is that the injury-plagued Fuller is set to become a free agent following the 2020 season. It’s not a foregone conclusion that the Texans will be able to re-sign him. If not, they need to think long and hard about taking pennies on the dollar in a potential deal.

Fuller, 26, is in the midst of a breakout 2020 season. The Notre Dame product has caught 31 passes for 490 yards and five touchdowns in seven games. Teams such as the Green Bay Packers, San Francisco 49ers and New England Patriots seem to make the most sense.

This former Denver Broncos first-round pick returned to the Texans on a three-year, $31.5 million deal back in March after initially signing a one-year contract with the team. Despite some struggles this season, Pro Football Focus did grade Roby out as the eighth-best cover guy in the NFL in 2019.

This has not helped Houston’s defense improve through seven games. In fact, the Texans are yielding an opposing quarterback rating of 114.5. That’s not going to cut it. This should also lead to rumors that the Texans want to move Roby ahead of the deadline. If that is indeed the case, cornerback-needy teams such as the Saints, Cardinals and Browns might come calling.

Production has been the name of the game for Fells since he joined Houston last season. In 23 career games with the team, this 34-year-old tight end has caught 71.6% of his targets. While he has only 14 receptions this season, that type of efficiency can’t be ignored.

The Texans must stockpile draft picks lost during the Bill O’Brien era. Even if it means adding a mere late-round pick for Fells, Houston must think long and hard about it. Expect rumors to pick up in this regard with the Eagles, Packers and Steelers potentially showing interest.

To be clear. Mercilus’ contract might be hard to sell off. He’s set to count $12 million or more against the cap in each of the next three seasons. The former first-round pick is also on the wrong side of 30. That’s likely why we have not heard a lot of rumors linking him on the trade block.

Even then, the Illinois product has been pretty darn consistent as a pass rusher throughout his near-decade in the NFL. He’s registered a combined 34 quarterback hits, 14.5 sacks and six forced fumbles in 39 games since the start of the 2018 season. If Houston opts to take below-market value, like we’ve seen with other edge rushers traded recently, Mercilus will likely be moved. In any event, this rumor should pick up steam over the next few days.