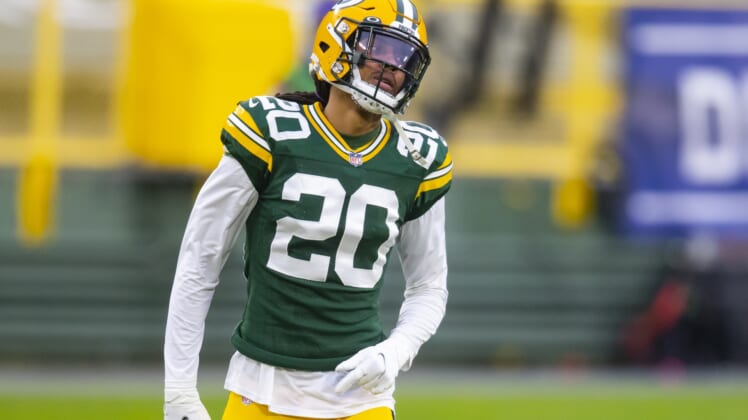 This comes after King had a woeful performance in the NFC Championship Game against the Tampa Bay Buccaneers, notably giving up a touchdown right before halftime that proved costly in the Packers’ 31-26 loss.

NFL Network’s Tom Pelissero reported that King’s one-year contract is worth $6 million, which is quite a price to pay considering how bad he was in coverage last season.

Although the deal is probably going to be laden with incentives, King hasn’t really played to the level where he can expect to hit them, unless they’re purely snap count or games-played bonuses.

Much of the reason the Packers’ defense ranked seventh against the pass in 2020 was due to their high-end pass rush that recorded 41 sacks, and the individual performance of corner Jaire Alexander. He finished with Pro Football Focus’ No. 1 grade at the position.

To his credit, King did show a penchant for mixing it up versus the run, recording 57 combined tackles in all and ranking 23rd out of 118 qualifiers in PFF’s run defense grades among cornerbacks. However, King was abysmal in coverage, ranking 108th individually.

Other free agents would’ve been upgrades over Kevin King

Run defense isn’t the primary job description for a cornerback. It’s to cover the opposing receivers. On that front, King was simply not good enough, and his stronger 2019 campaign in which he had five interceptions still saw him have an up-and-down, risky style of play that got exposed more so last year.

Given that Green Bay quarterback Aaron Rodgers is the reigning NFL MVP, you’d think Packers general manager Brian Gutekunst would be doing all he can to win now. Instead, he went the safe route with an incumbent player in King as opposed to trying to find a superior veteran on the open market.

Players like Josh Norman and Richard Sherman immediately come to mind as fits to start opposite Alexander on the outside. Norman and Sherman may not be physically what they once were, yet they have high football IQs and are more than capable of filling a No. 2 role with someone like Alexander already in the secondary.

Norman also shared a year in Washington with new Green Bay defensive coordinator Joe Barry. That’s another thing: Barry is bringing in a new system, so why not change up the personnel a bit by letting King walk and getting someone like Norman or Sherman?

The good news is the Packers have one of the NFL’s premier safety duos in Adrian Amos and Darnell Savage. Alas, that didn’t stop their defensive backfield from getting smoked by Tom Brady and Tampa Bay when it mattered most.

So let’s recap: Instead of letting Aaron Jones walk in free agency after drafting AJ Dillon in the second round of the 2020 NFL Draft as the presumptive long-term starter at running back, Gutekunst suddenly realized the value he had in Jones and re-signed him to a four-year deal.

Last year’s first-round pick, Jordan Love, will continue to ride the pine behind Rodgers, which mitigates the value he’d otherwise have on a cheap rookie contract by playing now and allowing Green Bay to spend far less at the most important position.

Speaking of Rodgers, the team isn’t restructuring his contract in 2021, when doing so could’ve open up considerable cap space to pursue free-agent roster upgrades, such as an improvement over King at the No. 2 cornerback spot. It wasn’t to be.

The spending of premium 2020 draft assets on perhaps the positions the Packers are least-needy at for the next few years, combined with the refusal to pursue logical open-market moves to get the team over the hump, makes Green Bay a mystery inside a conundrum.

What is Gutekunst’s vision? This wreaks of in-fighting, ego and a lack of unity in the Packers front office, and even the organization as a whole.

Rodgers has to be beside himself. Sure, he’ll welcome back a tenured teammate with open arms and do his best to build King up. Nevertheless, he and the fanbase have to be at least somewhat disappointed Gutekunst didn’t try harder to improve upon such a key spot that went a long way in excluding the Green Bay from Super Bowl LV.