When Aaron Rodgers announced his return to the Green Bay Packers, many assumed it would be followed by a Jordan Love trade. It felt even more obvious with the reports that Rodgers is signing a mutli-year contract with Green Bay to remain the starter for years to come.

Trading the 2020 first-round pick makes sense. He is no longer part of the team’s future plans and any potential return via trade could be used to draft a more impactful player. Plus, the young quarterback deserves an opportunity to prove himself elsewhere.

While all of that might be true, it seems Green Bay doesn’t currently have plans to trade its backup quarterback.

During an appearance Wednesday on ESPN’s “Get Up!”, NFL insider Adam Schefter reported the Packers aren’t discussing any potential Love trade and explained why he might not be moved.

“I’m not expecting that right now. Look, this could change during the course of the offseason, but I don’t know that there’s another team out there that could wind up giving Green Bay enough value to make them want to move on from him, and we don’t know if Aaron Rodgers is playing one or two more years, and Green Bay probably still likes Jordan Love as its QB of the future. He probably has more value to the Packers than he does to other teams, and I haven’t heard anything of the sort that he’s available or that teams are looking into him. Now, again, in this league, as we know, anything is always possible. Never rule out anything. But I haven’t heard any conversation of that sort with that sort of issue gaining traction so far.” 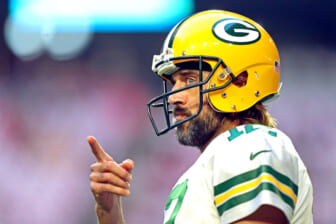 There is some rationale behind keeping Love. He carries just a $3.377 million cap hit in 2022 and he’s a backup quarterback Green Bay trusts. Considering the top backup signal-callers in NFL free agency are projected to receive $8-plus million per season, Love is the most cost-effective option.

From a long-term outlook, it’s been made clear that the Packers are no longer high on the quarterback they traded up to select 26th overall. At least for now, though, the franchise will avoid admitting its draft blunder with a trade.