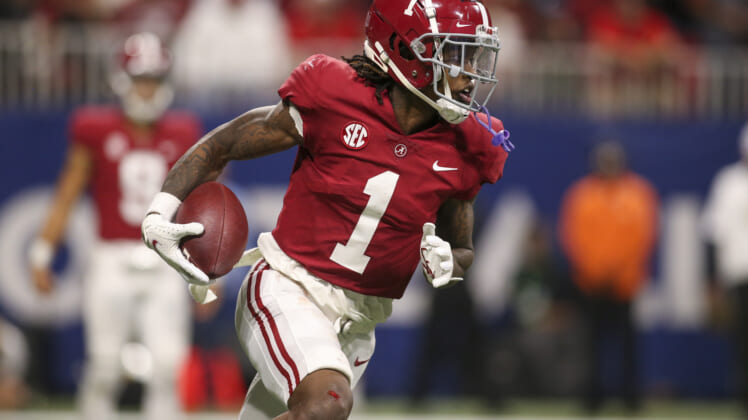 The Green Bay Packers got what they wanted this offseason with quarterback Aaron Rodgers returning for the 2022 season and beyond. If general manager Brian Gutekunst wants to make his star happy, he’ll find a way to land Jameson Williams in the 2022 NFL Draft.

Thanks to constraints against the NFL salary cap, Green Bay can’t go out and sign one of the top free-agent wide receivers. At a time when impact talents are also being floated on the trade market, it’s another avenue that isn’t a realistic option for Gutekunst. It puts everything on the upcoming NFL Draft.

Holding the 28th pick, Green Bay won’t have a shot at Drake London or Garrett Wilson. Even Chris Olave, who could make an instant contribution, is unlikely to fall to the end of Round 1. However, an unfortunate ACL injury suffered in the College Football Playoffs could result in Williams landing in Green Bay’s lap.

Let’s examine why Jameson Williams could be the perfect fit for the Green Bay Packers.

Jameson Williams is the missing piece in Packers’ offense

Marquez Valdes-Scantling, one of Rodgers’ favorite receivers, is expected to get $10-plus million annually in free agency. It’s a price the Packers can’t afford to match and even if they could, a more valuable replacement exists in Williams.

So, what are the Packers looking to replace in MVS? A wide receiver who led the NFL in average target distance (17.5), per Player Profiler, and finished with the 19th most deep targets (20) despite missing six games. Alabama’s electrifying wide receiver checks that box.

Williams – a 6-foot-2 speedster – first starred at Cardinal Ritter College Prep as a sensation in track and field. Alabama recognized his athleticism and turned the four-star recruit into one of the most explosive players in college football.

Teaming up with Heisman Trophy winner Bryce Young this past season, Williams finished with the sixth-most deep yards in the nation (671), per Pro Football Focus. Look at his performance in the SEC Championship Game against Georgia (7 receptions, 184 yards and two touchdowns) to get an idea of how dangerous he can be against one of the best defenses in college football history.

Williams won’t just replace MVS as the field stretcher in Green Bay’s passing attack. He snagged 20 screen catches this past season and averaged 9.3 yards after the catch. He’s also dangerous on jet sweeps. That’s something LaFleur wants in his offense but hasn’t often had, with Amari Rodgers not fitting well into that role.

Simply put, Williams checks so many of the boxes Green Bay looks for in a receiver. While he will still be recovering from the torn ACL, the Packers are in a division with three teams seemingly in rebuild mode. The NFC North is a cakewalk and that would allow Green Bay to bring Williams along at the right pace.

Green Bay’s special-teams woes in 2021 ultimately caused its downfall. Blocking certainly proved to be part of the problem and hiring Rich Bisaccia should correct some of the frequent mistakes. However, the Packers also need to improve their return game.

As a team, the Packers finished with the third-lowest average yards per kickoff return (17.7) and they finished with the fourth-fewest returns of 20-plus yards (12) in the regular season. Things weren’t any better when Green Bay returned punts. Packers’ return specialists averaged 8 yards per return and they suffered the third-most fumbles (four). Field position matters and that’s an area where this Super Bowl contender gave things away.

It would no longer be a problem if Williams heads to Lambeau Field. he averaged an absurd 35.2 yards per kickoff return this past season, proving to be a natural at the position. While returning kicks for touchdowns is a lot harder in the NFL, Williams would provide the Packers’ offense with better field position and fumbles wouldn’t be an issue.

There is another issue, Green Bay’s problems preventing long punt returns. It’s why LaFleur is considering using his starters on special teams more frequently in 2021, something that is likely to happen given Bisaccia is known for it.

As Todd McShay notes, Williams is also a fantastic gunner. The ability was even on display against Georgia in the SEC title matchup.

Even if it means moving up from the 28th pick, the Green Bay Packers would be wise to do whatever it takes to land Jameson Williams.