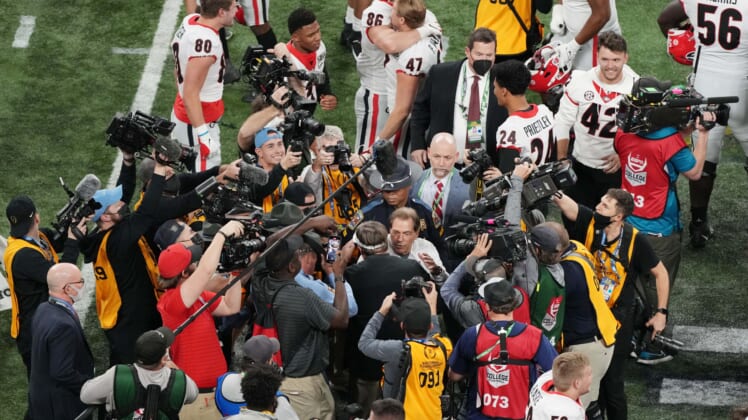 For the first time since 1980, the Georgia Bulldogs are college football national champions.

Quarterback Stetson Bennett was struggling through the first three-plus quarters of the game. Alabama’s star-studded defense, led by linebackers Christian Harris and Will Anderson, were dominating the trenches.

That’s when everything changed in the final stanza. After Alabama put up 10 consecutive points to open the fourth quarter and take an 18-13 lead, it was all Georgia Bulldogs football.

Bennett stepped up big time, throwing two touchdowns within the matter of 4:30 minutes, including a brilliant 40-yard strike to Adonai Mitchell. This retook the lead for Georgia after the inspiring quarterback lost a fumble earlier in the final stanza.

Then, with Georgia up 19-18, Bennett would hit Brock Bowers for a 15-yard touchdown to give the Bulldogs an eight-point lead.

This wasn’t even close to the end of it for Georgia. Instead, it was time for the team’s defense to step up. Redshirt freshman Kelee Ringo came calling, returning a Bryce Young interception 79 yards for a touchdown to put the game away.

In the end, Georgia scored 20 unanswered points in the final 8:09 of the game to earn its first national championship since 1980.

Having worked under Bama head coach Nick Saban for over a decade with the Crimson Tide, this was a career-defining win for Georgia head coach Kirby Smart. To win it for his alma mater had to mean a whole lot more.

As for Stetson Bennett, he grew up a lifelong fan of the Georgia Bulldogs. After walking on with the team, he transferred to a junior college before finally earning the starting job amid his return to Athens. Talk about overcoming a lot.

Here are some reactions to Georgia’s 33-18 win over Alabama in the CFP Championship Game.