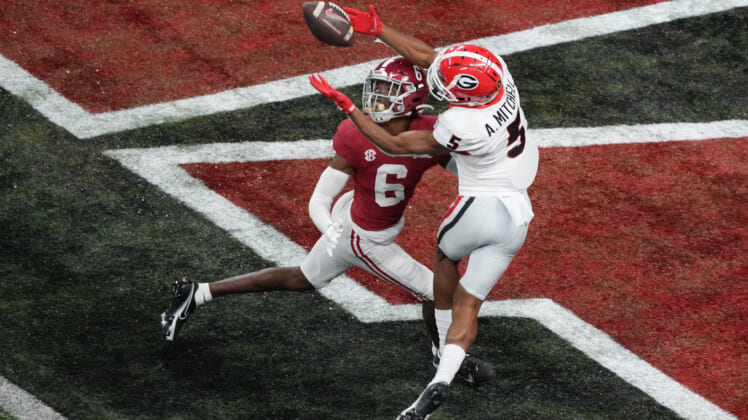 Georgia freshman wide receiver Adonai Mitchell made sure that Monday night’s CFP Championship Game against Alabama would include yet another highlight-reel play.

With the Crimson Tide having taken the lead early in the fourth quarter following a ridiculous forced turnover of Bulldogs quarterback Stetson Bennett, Georgia needed a game-changing play on offense.

Mitchell was more than willing to make the biggest play of his young college career. With Georgia down 18-13 about midway through the third quarter, the Texas native hauled in one of the best touchdown catches we’ve seen on a college football field in some time.

That’s beyond description right there. At 6-foot-4, Adonai Mitchell certainly had the height advantage over Alabama cornerback Khyree Jackson.

In no way did we expect the dude to pull a Randy Moss.

What makes this even crazier is that it came on a free play after Alabama was called for off-sides. Kudos to Bennett for putting it up there after he struggled big time through the first three-plus quarters of the title game.

But this is all about Adonai Mitchell after he put up just 27 receptions in his first 11 games as a freshman this season.