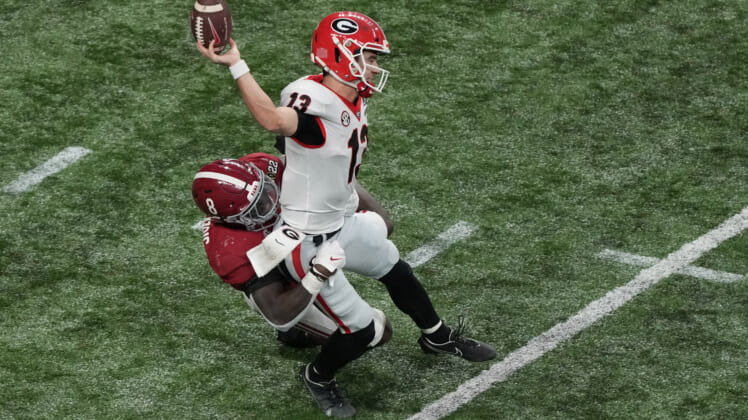 Alabama linebackers Christian Harris and Will Anderson have been dominant all season for the Crimson Tide.

With Nick Saban’s squad down 13-12 in the fourth quarter of Monday night’s title game against Georgia, the two came through big time.

Struggling Bulldogs quarterback Stetson Bennett rolled out to the right side in an attempt to find someone down the field. He was initially facing pressure from Anderson before scrambling. That’s when Harris forced a fumble on a play that’s too surreal to describe.

The original call on the field was a fumble with Alabama defensive back Brian Branch recovering it at the Georgia 16.

It went to review. Live, Bennett’s arm seemed to be going forward with Branch recovering the ball out of bounds. Officials on hand in Indianapolis announced that it was going to be either a fumble or another intentional grounding on the part of the quarterback.

But in slow-motion, it became more than obvious that Bennett actually did fumble the ball with Branch getting a toe in for a clear Alabama fumble.

In what can’t be considered too much of a surprise, Heisman winner Bryce Young led Alabama to a go-ahead touchdown on a scoring pass to Cameron Latu for an 18-13 lead with just over 10 minutes remaining in the game.