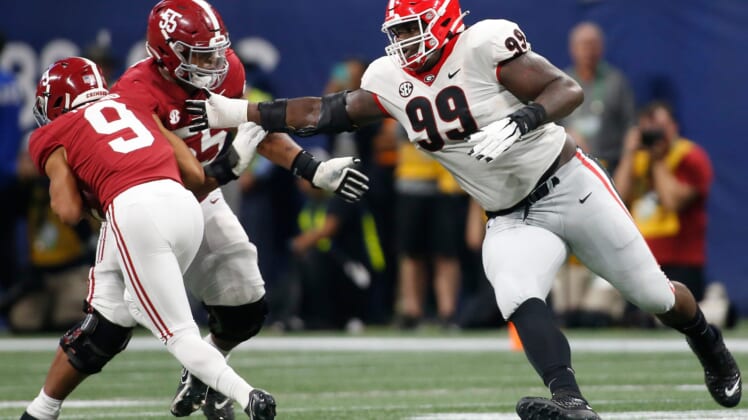 The stage is set for the 2022 CFP championship game, with an SEC Championship Game rematch of the Alabama Crimson Tide vs Georgia Bulldogs. Check out our CFP national championship preview, prediction and game info below.

When is the CFP championship game?

The 2022 college football national championship will be played on Monday, Jan. 10 at Lucas Oil Stadium in Indianapolis, Indiana. Here’s where and when to watch the CFP championship game.

When Alabama lost to Texas A&M, meant wondered if it would be a fatal blow to the program’s playoff hopes. After narrowly escaping with victories over LSU and Auburn, doubts surrounding the Crimson Tide as a championship contender became even more prominent.

But for the sixth time since the CFP championship was introduced, Alabama will be competing for a national title. There’s plenty of credit to go around, with Heisman Trophy winner Bryce Young generating plenty of praise, but this is an attack capable of scoring in bunches however it wants.

We’ve seen this team’s ability to dominate via the ground or through the air in key moments. Unsurprisingly, it’s all led to one of the best offenses in college football.

In the SEC Championship Game, Young stole the show. After the Crimson Tide were held off the scoreboard in the first quarter, Young came through with three second-quarter touchdowns and four scoring drives in a 14-minute span. That ability to score early isn’t a fluke. Entering the CFP Semifinal, Alabama averaged 23.4 points per first half this season.

While Young wasn’t quite as dominant against Cincinnati, finishing under 200 passing yards for the first time this season, he still racked up three touchdowns. It was clear the Crimson Tide missed John Metchie (torn ACL), with no receiver topping 70 yards against Cincinnati. But the emergence of Brian Robinson Jr. is far more important.

The senior delivered a quiet 1,000-yard, 14-touchdown season in the regular season. But he came alive against Cincinnati, delivering the best playoff performance ever by an Alabama running back. He turned 26 carries into 204 rushing yards, all against a Bearcats’ front that allowed just 3.4 ypc this season and 91 rushing ypg in the last three contests.

It’s a credit to the Crimson Tide’s offensive line, which is playing its best football at the right time. That all bodes well for a CFP championship matchup against Georgia.

While Michigan edge rusher Aidan Hutchinson finished second in the Heisman Trophy voting, Alabama Crimson Tide linebacker Will Anderson is the best defensive player in college football. He finished second in the FBS in sacks (15.5) and led the nation in tackles for loss (29), leading the way for a defense that improved as the season went on.

Alabama’s defense is the only reason this team came back in the Iron Bowl. Auburn converted just 27.7% of its third-down attempts and managed just 137 total yards, averaging 0.6 yards per rush and 5.3 ypa through the air. The momentum that carried into the SEC Championship Game.

Against Georgia, the Crimson Tide’s pass rush dominated. While Stetson Bennett was only sacked three times on more than 50 dropbacks, he was also under constant duress. Anderson generated nine pressures, the most by any opponent against Georgia since 2016, which proved crucial in Bennett’s two interceptions.

With additional time to prepare for Cincinnati, Alabama controlled the flow of the game once more. While the Bearcats possessed the football for 26 minutes, they did nothing during that time. After a 13-play, 60-yard drive that ended in a field goal, the Bearcats finished with 84 total yards on their final nine possessions.

Alabama will need to do a better job containing tight end Brock Bowers, who racked up 10 receptions and 139 receiving yards in the SEC title game. But if they can consistently pressure Bennett, his mistakes will decide the game.

A rough SEC Championship Game did no favors to Stetson Bennett’s reputation. While the former walk-on recorded 340 passing yards and three touchdowns, he also threw 19 incompletions, took three sacks and threw two costly turnovers. But that was an outlier performance.

Entering the CFP Semifinal, Georgia’s quarterback held a strong 64.1% completion rate with a 24-7 TD-INT ratio and a 176.8 passer rating. Those numbers aren’t inflated by beating up on bad competition. Against top-25 opponents, Bennett held a 161.4 passer rating, averaging 8.9 ypa with an 8-2 TD-INT ratio. He also performed well against the SEC, completing 62.7% of his attempts with a 155.6 passer rating.

While Bennett has fewer marquee names around him than Bryce Young, Georgia’s offense doesn’t lack playmakers. Brock Bowers, arguably the best tight end in college football, quickly became a star in his freshman season. The former four-star recruit opened up the CFP Semifinal with a touchdown, his 12th of the season.

We’ve already seen that Alabama lacks the skill players to cover Bowers in the middle of the field. It’s made even more difficult because of running back James Cook. The brother of NFL star Dalvin Cook, Georgia’s senior all-purpose back is a modern offensive weapon.

Like his older brother, James is a natural pass-catcher. He can run routes out of the backfield, giving him space to get open on wheel routes, or he can operate out of the slot. He hasn’t been featured heavily this season as a receiving threat, but he showed against Michigan that he must be accounted for at all times.

Cook and Bowers are two of the biggest threats that Alabama’s defense will have to contain. But wide receiver George Pickens could also be an X-factor in the CFP championship game. He underwent surgery for a torn ACL in March and just returned to action on Nov. 27. Now 10 months removed from the injury and gaining more confidence in his surgically repaired knee, the 6-foot-3 receiver is a name to watch against Alabama’s secondary.

As for the battle in the trenches, Georgia simply needs to plat at the level we saw during the regular season. The Bulldogs allowed the fifth-lowest sack rate (3.4%) in 2021, with the SEC Championship Game being an outlier.

The best defense in college football

Similar to Bennett, the Alabama game damaged Georgia’s reputation defensively. The Bulldogs couldn’t get to Bryce Young, failing to record a sack on 44 pass attempts. It resulted in the Crimson Tide tacking up 421 yards and three touchdowns through the air.

But there’s plenty of reason to think the Bulldogs’ defense fares better in the CFP championship. If you eliminate the one-game sample, the stats from the regular seasons showcase one of the best defenses in college football in the last five years.

This also won’t be the same Alabama offense. While Jameson Williams finished as the leading receiver in the first meeting, racking up 184 yards and two touchdowns, plenty of that damage happened because Georgia also had to account for John Metchie III. But Alabama’s second 1,000-yard receiver will miss the championship game. making it easier to game plan for Bill O’Brien’s scheme.

Georgia can shift safety help towards Williams, forcing Young to rely heavily on receivers that he doesn’t have great chemistry with. If the Bulldogs can pair that with dominance from the defensive line, there is a clear path to victory.

Anyone expecting a blowout in the CFP championship will be disappointed. Losing Metchie is a significant blow for Alabama’s offense and we saw the effects it had against the Bearcats. The Crimson Tide’s offensive line is also a concern, especially against the best front seven in the FBS.

But the Crimson Tide have two clear advantages. First, Bryce Young is a significantly better quarterback than Bennett. It gives Alabama a distinct edge, especially if this matchup comes down to the final drives. The other advantage is found on the sidelines, with Saban’s history of preparing his players for big games and dominating opponents coached by his former assistant important factors in this contest.

Alabama might try to establish its footing on the ground early, but Georgia’s collection of talent in the trenches with star linebacker Nakobe Dean behind it shifts things in Georgia’s favor. So, the Crimson Tide will hope the offensive line that protected Young in the SEC Championship Game keeps him clean again. Throwing deep will be a lot more challenging with Derion Kendrick lined up on Jameson Williams. So, Young needs either Slade Bolden or Jahleel Billingsley to step nup.

Fans should expect a close game that will come down to the fourth quarter. But when the final whistle blows, thanks to a late scoring drive led by some clutch throws by Young, Saban will further cement his legacy as the best college football coach ever with his eighth championship.