Floyd Mayweather’s next fight: What’s next for ‘Money’ after his win in Abu Dhabi? 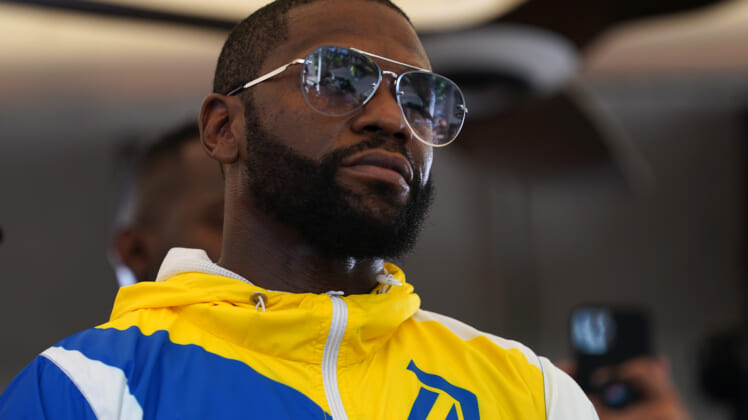 Following his easy win over Don Moore in Abu Dhabi on May 21, Floyd Mayweather’s next fight might come later in the year. With the boxing icon in pursuit of big pay days only, there is a unique group of possible opponents on the horizon.

Who will Floyd Mayweather’s next fight be against

“Money” is not out to pointlessly risk his unbeaten record at 45-years-old. However, that doesn’t mean he isn’t up for a having a little fun. It will take a foe with some serious name value to make Mayweather, Jr. endure a serious training camp for a boxing return. That’s why rematches with Manny Pacquiao, Conor McGregor or Logan Paul make the most sense.

As was to be expected, Mayweather made easy work, and at times a mockery, of his former sparring partner Don Moore inside the Etihad Arena on May 21.

What happened: Moore and “Money’s” eight round exhibition went the distance. Yet, despite some early resisitance, Mayweather, Jr. made things look easy as he toyed and taunted the also retired boxer. At one point in the final round, the former multi-division king even knocked his opponent down with a nasty body shot.

The fallout: It is unclear when Mayweather could return to action but with easy money always available, especially in the Middle East, don’t expect the undeafeated legend to sit on the sidelines too long.

The roadmap: Chances are Mayweather returns to the ring at some point in the winter to take part in another exhibition with little risk and high monetary rewards. A rematch with Logan Paul or Manny Pacquiao are the likely scenarios.

What makes Floyd Mayweather so popular?

There is no doubt Floyd Mayweather is one of the greatest boxers to ever compete in the sport. Yet what makes him a one of a kind was that his mix of skill and brash bravado was able to transcend the industry. He is the type of talent that combat sports fans have long been willing to pay big money to see win, or hopefully lose.

The greatest villain in combat sports: Although Mayweather was a hero to some, relishing his role as a villain to all was what truly made him a box office megastar. And his ability to back up all his talk only heightened his appeal.

The bad side of the legacy: Mayweather has also spent a good bit of time in courtrooms during his life.

Money is often one of the greatest measuring sticks for a fighter’s success. As of 2022, Mayweather’s net worth is reported at $450 million. However, the boxing star claims it is closer to $1.2 billion.