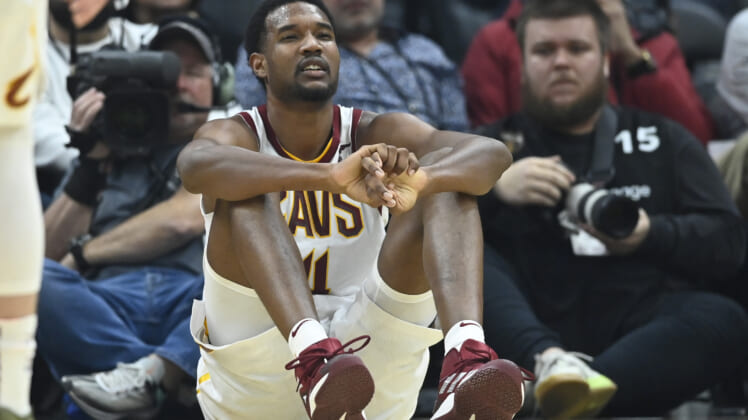 With All-Star big man Jarrett Allen sidelined indefinitely due to a fractured finger, Cleveland has been relying a lot on Mobley to keep their playoff hopes alive.

Unfortunately, the rookie No. 3 pick from USC saw himself go down to an injury during Monday night’s game against the Orlando Magic. Mobley was seen exiting the court in the second quarter after an ugly-looking ankle injury.

For their part, the Cavaliers pretty much ruled Evan Mobley out immediately with what’s being described as a left ankle sprain.

The only bit of good news here is that it looks like a lower-ankle injury. Those take less time to heal than the upper-ankle variety. The bad news? We’re at the point in the season that any type of injury will have a rather lasting impact.

Cleveland Cavaliers to be without Evan Mobley for the stretch run?

It’s safe to assume Mobley won’t be able to suit up for the Cavaliers here in the short term. After Tuesday’s outing, Cleveland has only seven games remaining in the regular season.

The Cavs entered Tuesday’s action with a 41-33 record and as the seventh seed in the Eastern Conference. They’ve struggled a bit recently, losing 12 of their past 18 outings.

As of right now, Cleveland would take part in the play-in tournament with an initial pairing against the Atlanta Hawks. The team is one game behind the Toronto Raptors for the sixth spot and an automatic bid in the NBA Playoffs.

In addition to Toronto Raptors star Scottie Barnes, Mobley is seen as one of the top NBA Rookie of the Year candidates. He was also playing pretty well before the aforementioned injury — averaging 17.5 points and 9.9 rebounds on 54% shooting over the past 11 games.

In addition to Mobley’s injury, the Cavaliers got other bad news on that front earlier on Monday with news that Dean Wade is out for the remainder of the season with a torn meniscus.