Eight loaded teams that can gamble with the NFL draft

Some floundering franchises really need to ace the upcoming NFL Draft. Unfortunately, not every team has the luxury of having a roster stocked to the brim with elite talent. On the other side of the coin are strong contenders that can afford to gamble when they go on the clock.

Teams that are loaded at nearly every position can actually have some fun while trying to select some later-round picks that might turn into gems. Perhaps moving up the draft board might be in store for these clubs looking to make bold moves, too.

Seven of the eight teams we consider here made the playoffs for 2017. Only one did not quite advance to the postseason, though it does have one of the more sound rosters in the league. Starting with that particular AFC West franchise, here are eight teams that can take a gamble in the 2018 NFL Draft.

The Chargers finished the 2017 season falling just short of making the playoffs. They have a well-oiled offense featuring quarterback Philip Rivers, who has not missed start since 2006. He is armed with some tremendous talent at wide receiver and tight end — Keenan Allen and Hunter Henry to name a couple awesome playmakers. Melvin Gordon and the intriguing Austin Ekeler give the team stability at the running back spot.

Defensively, the Chargers boast Melvin Ingram and Joey Bosa as one of the best edge-rushing tandems in the NFL. And, cornerback Casey Hayward is a show-stopper in the Chargers’ secondary.

Approaching this year’s draft, the Chargers have one pick per round, except for the seventh. Their first-overall pick comes at No. 17 when it would make the most sense to just take the best player that falls to them no matter the position. Though, taking the opportunity to enhance Rivers’ offensive line or gambling with a rookie quarterback (Lamar Jackson is reportedly on their radar) that can afford to sit and learn would be wise too.

Typically a strong contender in the NFC South, the Falcons boast a well-rounded team on both sides of the ball. From quarterback Matt Ryan to wideout Julio Jones and the running back duo of Devonta Freeman and Tevin Coleman, what is not to like on offense? Perhaps it would be worth the risk for the Falcons to spend high on a top tight end prospect or another wide receiver such as Oklahoma State’s James Washington to fill Taylor Gabriel’s void.

On defense, the Falcons are pretty stout after giving up only 19.7 points on average per game last year. Though, splurging on a defensive tackle after losing Dontari Poe in free agency could not hurt.

The Falcons can definitely afford to make some bold picks starting with No. 26. Beyond that they have one pick in each round with the exception of the fifth.

There is not much to criticize on a Saints roster that led them through the Divisional Playoffs this past January. Quarterback Drew Brees has an army on offense that many other teams should be downright jealous of. Starting with wideout Michael Thomas to the record-setting running back tandem of Mark Ingram and Alvin Kamara, it might be fun to see the Saints attempt to snare a pass-catching rookie tight end.

This is a position that has been boring to watch ever since the Saints traded away Jimmy Graham in 2015. Gambling on a quarterback to eventually replace Brees is an option too as this year’s draft class is deep.

On top of that, maybe the Saints attempt to bolster their pass-rushing corps. Whichever way things play out, the Saints can afford to take some risks with their boatload of draft picks. The Saints have a pick in each round but the second, including two in the fifth and sixth rounds. The vacant second-rounder was traded to the San Francisco 49ers in 2017 when the Saints boldly moved up to select Kamara. Boy, did that move pay off. 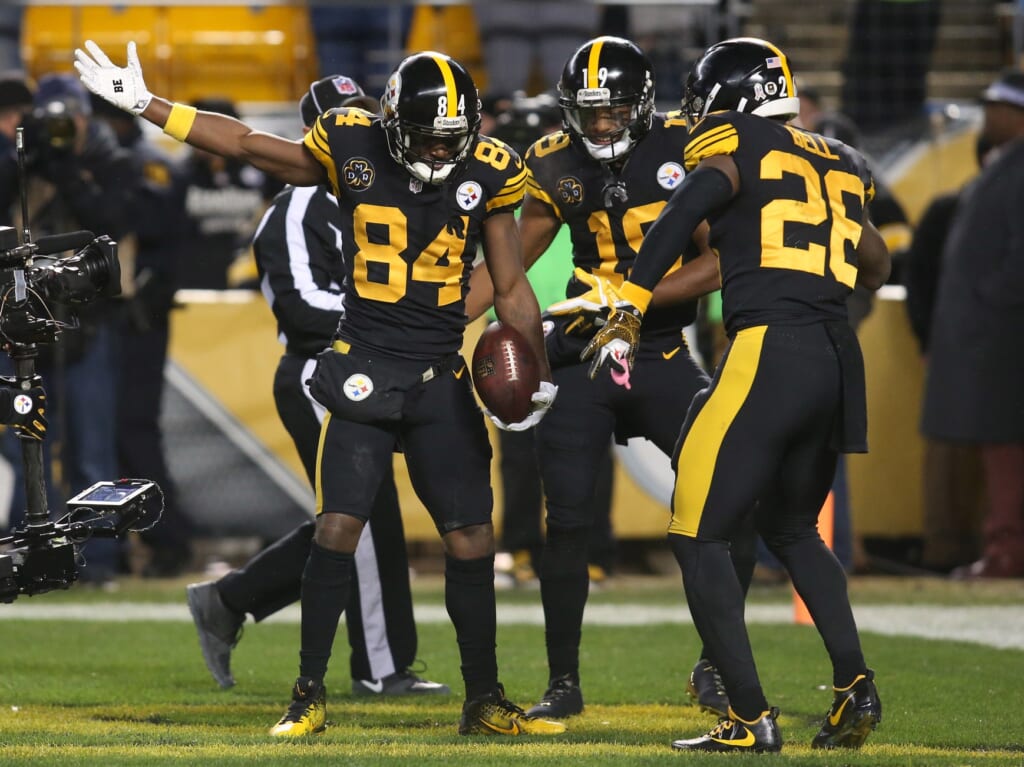 Falling in the divisional round last year, the Steelers sport the best overall roster in the AFC — at least in the eyes of many. Quarterback Ben Roethlisberger wants to play for a few more years while wide receiver Antonio Brown and running back Le’Veon Bell are performing out their minds. Entering his second year, wide receiver JuJu Smith-Schuster is no slouch either.

On the other side of the field, the Steelers defense allowed the fifth-fewest yards as well as only 19.3 points per contest last year.

Entering the draft with a lower-first round pick, which is pretty much the usual for the Steelers, the team will make its first choice at No. 28. After this, the Steelers have one pick each in the second and third rounds and two picks in both the fifth and seventh rounds.

With an offense that really has little room to improve, the Steelers could surprise and take a flier on quarterback such as Lamar Jackson of Louisville or Mason Rudolph out of Oklahoma State. Or perhaps they may benefit from adding another running back due to Bell and his contract stalemate. Outside of this it would not hurt to beef up on defense and nab a linebacker or defensive tackle.

After a red-hot finish in 2017, the Jags seem to be “the team” to chase down in the AFC South. The signing of left guard Andrew Norwell should help quarterback Blake Bortles and running back Leonard Fournette out in big way. So the Jags might want to experiment with grabbing a wide receiver or two. This would be to enhance their roster that no longer has Allen Robinson or Allen Hurns.

On defense, the Jags are about as solid as solid gets. Their pass rush was brutal last season with Jacksonville gaining 55 total sacks. Meanwhile, nobody wants to mess with defensive backs Jalen Ramsey, A.J. Bouye or Barry Church.

So at this point with picks in every round but the fifth, and two in the seventh, why not make some bold moves that serve two purposes — bolster your own strength while causing teams picking next to rethink their selection. This could include taking prime prospects off the board so franchises selecting next will miss out. For once in a long time, the Jaguars are in a position to enjoy a laugh.

Nearly as perfect as it gets, the Vikings house an impressive roster loaded with talent. Many fault the Vikings for making quarterback Kirk Cousins the highest-paid guy in the NFL. But, he is staged for instant success signing with a team that has some up-and-coming receivers in Stefon Diggs and Adam Thielen. Tight end Kyle Rudolph as well as running backs Dalvin Cook and Latavius Murray also make for a fool-proof offense.

This affords the Vikings an opportunity to target some enhancements for their offensive line so the aforementioned Cousins performs to the best of his abilities.

Defensively, there is not much to tweak. The Vikings defense allowed a league-low, 275.9 yards and 15.8 points per game in 2017. But swooping in on another defensive back just because and to keep another team such as the Philadelphia Eagles from selecting one makes for some payback fun.

The Vikings have one pick in every round but the fourth. 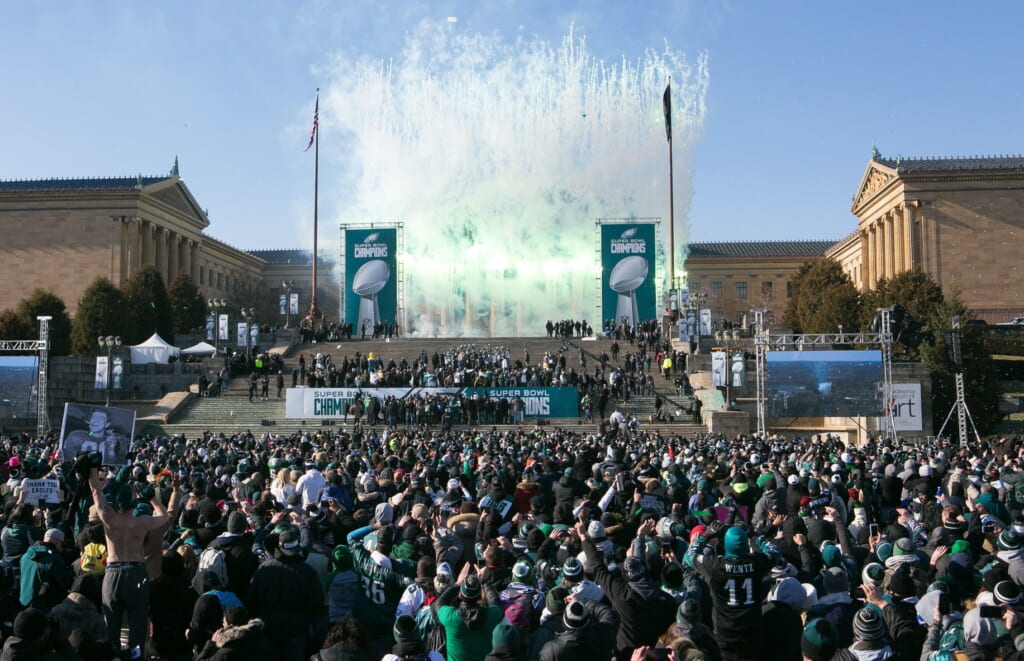 Speaking of those Eagles, the Super Bowl-winning team picks at No. 32 then does not draft again until twice at the end of Round 4. After this, the Eagles have the last pick in Rounds 5-7. With a decently loaded roster across the board, the Eagles can attempt to go bold and find some diamonds in the rough (like these).

If any area needs attention it would be at the cornerback spot. And, why not select a later-round quarterback as a backup to Carson Wentz? This would make trading Nick Foles — who would love a starting job — an enticing option. Think back to the Dallas Cowboys selecting Dak Prescott in Round 4 in 2016.

Outside of these positions, the Eagles are stockpiled at receiver with Alshon Jeffery, Nelson Agholor and Mike Wallace. Tight end Zach Ertz and running backs Jay Ajayi and Corey Clement only compliment the story.

On the defensive line, the Eagles have a front seven that managed to beat the Vikings and New England Patriots in their final two games. Defensive end Michael Bennett joins this group.

This is a draft that affords the Eagles the luxury of kicking back and making some splashy moves.

Lastly, the Rams have been busy adding to their army this offseason. The big names new to L.A. this season are cornerbacks Marcus Peters and Aqib Talib, defensive tackle Ndamukong Suh and wide receiver Brandin Cooks. It is a good thing the Rams have been active, since they do not draft their first player until No. 87 in Round 3.

It is difficult to know who will be appealing as a mid-third-round deal. After the Rams make their selection, they then have one fourth-round pick and five picks in Round 6.

This makes the Rams’ drafting scenario right now completely unpredictable. It also provides the opportunity for the Rams to gamble on some dark horses.

On offense, perhaps another running back would help keep Todd Gurley preserved. Defensively, adding a couple of later-round linebackers would not hurt. The Rams gave up a generous 122.4 rushing yards on average per tilt last year.