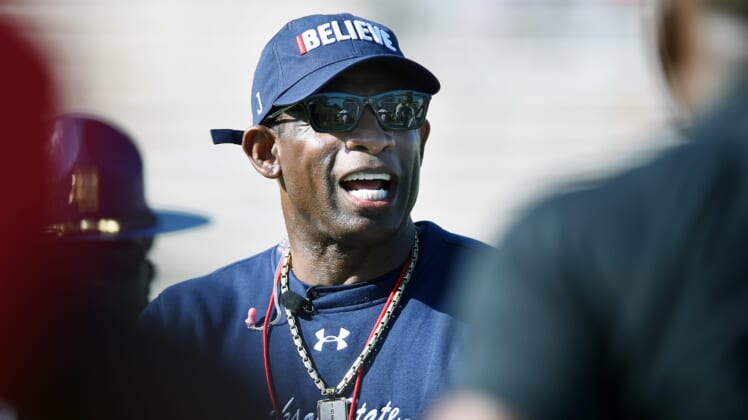 Deion Sanders was on the receiving end of a pretty serious claim from Alabama head coach Nick Saban on Wednesday night.

The multi-time champion head coach claimed during an event in Birmingham that Sanders, the current Jackson State head coach, paid $1 million to land a top-end recruit.

“During a Wednesday night event in Birmingham, Saban claimed Jackson State ‘paid a guy a million dollars last year that was a really good Division I player to come to school,” and that, “it was in the paper and they bragged about it. Nobody did anything about it.'”

The assumption here is that Saban is talking about Deion Sanders and Jackson State landing five-star recruit Travis Hunter, who flipped his commitment from Florida State to the Tigers last December.

These comments from Saban comes after he alleged Jimbo Fisher and Texas A&M paid their entire 2022 recruiting class via name image and likeness (NIL) deals.

As for Sanders, he is having none of it.

As for Hunter, he also replied to Saban’s allegations.

For his part, Saban seems to be in a spat on multiple fronts with other college football head coaches. It was earlier on Thursday that the aforementioned Fisher went at the legendary head coach.

“First of all, I’ll say it’s a shame that we have to do this. It’s really despicable. It’s despicable that somebody can say things about somebody — and more importantly 17-year-old kids. You’re taking shots at 17-year-old kids and their families,” Fisher said. “That they broke state laws. That we bought every player in this group. We never bought anybody. No rules were broken.

The way we do things, the ethics in which we do things — and these families — it’s despicable that a reputable head coach could come out and say this. When he doesn’t get his way, and things don’t go his way, the narcissist in him doesn’t allow those things to happen, and it’s ridiculous when he’s not on top. And the parity in college football that he’s been talking about, go talk to coaches who coach for him. You’ll find out all the parity. Go dig into where he’s been. And it’s a shame you’ve got to defend 17-year-old kids and families.”

We knew that this was going to b a potenial issue when it was ruled that college athletes could be paid for their name image and likeness.

To an extent, we’ve seen this change the dynamics of college football. That included Lincoln Riley leaving the Oklahoma Sooners for a larger market in that of the USC Trojans. He received a $110 million deal to head to Southern California.

Part of his departure from Oklahoma had to do with NIL deals paying athletes more in a larger market than Norman. That included former five-star recruit Caleb Williams transferring from Oklahoma to join Riley in California.

As for Deion Sanders, he’s been Jackson State’s coach since the start of the 2020 season — posting a combined 15-6 record in the process.