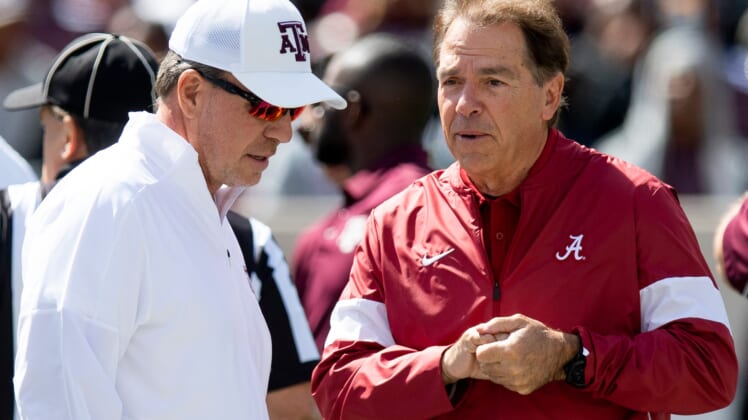 As the NCAA and every college program tries to figure out how to adjust in the new era of Name, Image and Likeness compensation for student-athletes, Alabam Crimson Tide coach Nick Saban isn’t holding back. Recently, the legendary coach took shots at Texas A&M and Jackson State.

The Aggies pulled in one of their best recruiting classes ever, landing the No.1 recruiting class in 247 Sports’ 2022 team rankings. Texas A&M easily crushed Alabama in recruiting the top talent, landing eight five-star recruits compared to three for the Crimson Tide.

Saban noticed. During a recent speech for local business leaders in Birmingham, the Alabama coach specifically addressed the difference in recruiting tactics between the Aggies and Crimson Tide.

“I mean, we were second in recruiting last year. A&M was first. A&M bought every player on their team — made a deal for name, image, likeness. We didn’t buy one player, all right? But I don’t know if we’re gonna be able to sustain that in the future because more and more people are doing it. It’s tough.”

Nick Saban on Texas A&M”s No. 1 recruiting class, via ESPN

Saban isn’t the first to take a shot at Texas A&M. Lane Kiffin joked that the Aggies might get a luxury tax for how much they spent on players in the 2022 recruiting cycle. But Jimbo Fisher’s program isn’t the only one that Saban brought up. 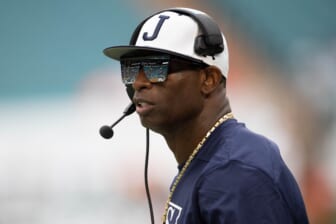 “Jackson State paid a guy $1 million last year that was a really good Division I player to come to the school. It was in the paper, and they bragged about it. Nobody did anything about it.”

Saban’s shot at Jackson State and his concerns about the ‘Wild West’ of NIL deals are fascinating given Sanders also recently blasted the NCAA and said programs like Jackson State are at a disadvantage when student-athletes get paid.

As for how Alabama lands its players, Saban said 25 players combined for $3 million in NIL revenue. He also believes his program does things the right way, not allowing for boosters and NIL deals to overtake how the Crimson Tide pulls in top athletes completely. Saban wants changes to the NIL system, and adjustments made to address the problem of coaches creating “an advantage for themselves.”

Of course, there’s another angle to this story. Saban said all of this in front of business leaders and boosters in Alabama, telling them it’s possible the Crimson Tide won’t be able to maintain their way of recruiting if something doesn’t change.

That could mean, without NIL reform, Saban simply wants Alabama boosters to start offering recruits more money. As of now, it’s the best way for the Crimson Tide to maintain their spot in the 2022 college football rankings.