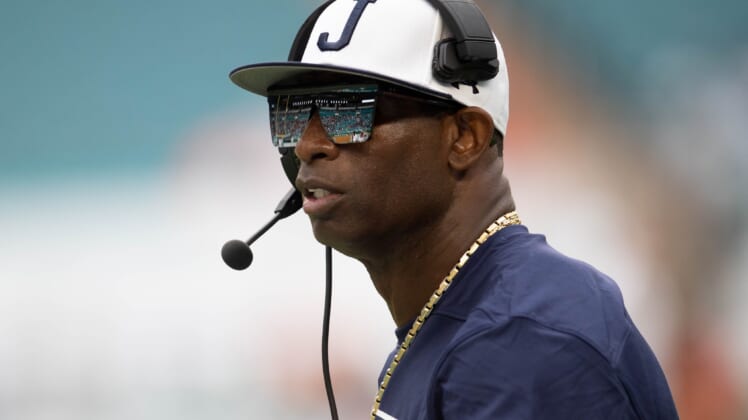 Jackson State Tigers football coach Deion Sanders is learning the ropes of recruiting and what it takes to build a winning college football program. In a new era where student-athletes are being compensated under the Name, Image and Likeness, Sanders believes there is a problem.

The 54-year-old NFL legend is starting to build the Tigers into a quality program. After a 4-2 season in the spring 2020 season, Jackson State improved to 11-2 after an outstanding 20221 campaign. The success and spotlight on the HBCU program helped Sanders pull in No. 1 recruit Travis Hunter.

However, the 2022 offseason has brought an issue to light in Sanders’ mind. Amid the ongoing debate over the unregulated NIL period, where student-athletes can receive money from companies or individuals for their NIL rights, the NCAA and many schools are trying to create policies during a time that can only be described as the ‘Wild West’ in college football.

In a video tweeted to the NCAA on Wednesday, Sanders raised questions about the influence NIL money can have on student-athletes. He also suggested the only way to help young men receiving NIL money is through teams being allowed to hire more coaches who know how to work with those young men.

Deion Sanders on the dangers of paying student-athletes

There is an ongoing loophole the NCAA and every college program wants to address. Boosters for some of the best programs in the country have realized they can use NIL money as a means of enticing student-athletes to leave one school for another. With reports estimating that some student-athletes are receiving six- and even seven-figure deals, there is debate about how to address it.

As Sanders notes, this does hurt smaller programs. Whether it’s on the recruiting trail for the top players out of high school or players currently on the roster who could be poached by a bigger school with deeper pockets thanks to boosters, there is a wide gap in power.

“See, with the NIL, which really ain’t NIL because it ain’t no name, image, and likeness. It’s just pay-per view right now. That’s what they’re doing at the big boys, little boys we can’t compete with that. But anyway, you’ve got a problem.”

Of course, there are also problems with these comments coming from Sanders. As some have argued, he’s not exactly the right person to be making these points and his solution is also one purely looking out for his own interests.

Travis Hunter signed a NIL deal with J5 Caffe, a Black-owned coffee company, and many have speculated endorsement money helped influence him toward Jackson State. It’s perfectly legal in the current system and if it did happen, it’s no different than connections made between top recruits and Power 5 programs.

There’s also the issue regarding Sanders’ solution. The NCAA received overwhelming criticism and was blasted by the U.S. Supreme Court for the system that saw all revenue go towards conference officials, coaches and staff. Sanders seems to believe the real problem now is he and his coaches aren’t being paid enough.

Sanders, once of the biggest football stars ever, certainly would have cashed in with NIL deals if they were permitted when he was a student-athlete. As for his concern regarding marquee programs having an advantage over small schools, perhaps that’s part of the reason why he started looking at other jobs in December.