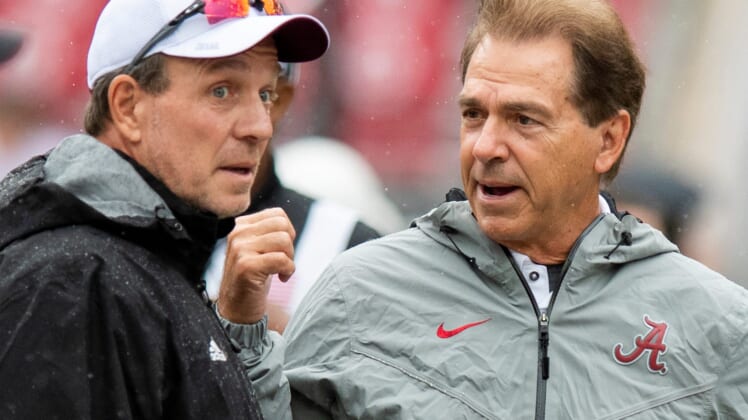 Texas A&M football coach Jimbo Fisher fired back at his legendary Alabama counterpart Nick Saban for his recent comments claiming that the Aggies “bought every player” in their latest freshman class.

The start of the college football season is still a few months away, but things are starting to heat up between two of Division-I’s best programs. On Thursday, Saban made headlines when he claimed Fisher and Texas A&M University purchased their top-ranked recruiting class by using the new NIL rules to their advantage when they landed some of the best high school players in the country last year.

“I mean, we were second in recruiting last year. A&M was first. A&M bought every player on their team — made a deal for name, image, and likeness. We didn’t buy one player, all right? But I don’t know if we’re gonna be able to sustain that in the future because more and more people are doing it. It’s tough,” Saban said (h/t ESPN).

The Aggies had one of their best-recruiting classes in program history when they scored eight five-star athletes compared with the Crimsion Tide landing just three.

Related: College football games today – Get the key dates in the upcoming 2022 season

Well, it wasn’t long before those comments made their way back to the A&M coach. On Thursday, Jimbo Fisher addressed Nick Saban’s comments at a press conference and fired back in a big way. Calling his South Eastern Conference rival coach a “narcissist” who is unhappy he isn’t getting way, and questioned his integrity by trying to pull high school students and their families through the mud with unsubstantiated speculation.

“First of all, I’ll say it’s a shame that we have to do this. It’s really despicable. It’s despicable that somebody can say things about somebody — and more importantly 17-year-old kids. You’re taking shots at 17-year-old kids and their families,” Fischer said (via PFF College). “That they broke state laws. That we bought every player in this group. We never bought anybody. No rules were broken.

“The way we do things, the ethics in which we do things — and these families — it’s despicable that a reputable head coach could come out and say this,” he continued. “When he doesn’t get his way, and things don’t go his way, the narcissist in him doesn’t allow those things to happen, and it’s ridiculous when he’s not on top. And the parity in college football that he’s been talking about, go talk to coaches who coach for him. You’ll find out all the parity. Go dig into where he’s been. And it’s a shame you’ve got to defend 17-year-old kids and families.”

The National Championship runners-up Alabama Crimson Tide will face the Texas A&M Aggies in Week 6, in a game that will surely be a highly anticipated matchup after this week’s public war of words. Last season the Crimson Tide finished 13-2 and won the SEC title. The 8-4 Aggies ended the season fifth in the West Division of the SEC.