The Trail Blazers, who entered Monday with an 11-13 record, fired their longtime general manager after a workplace inquiry found he was verbally abusive and hostile to multiple employees during his tenure. It’s a decision that came just a few months after reports of a growing rift between Lillard and Olshey.

Issues between the two men can be tied to Portland’s coaching search and its issues building a contender around the All-Star point guard. After Portland fired head coach Terry Stotts, Lillard strongly encouraged Olshey to hire Jason Kidd as the Trail Blazers’ new coach.

Instead, Portland hired Chauncey Billups. Despite the coach facing rape allegations In 1997, Olshey believed that Billups could help the team’s current core improve defensively and compete for a championship. Instead, the decision only made things worse in Portland.

Entering play on Dec. 6, Portland ranks last in Defensive Rating (113.3) and is allowing the sixth-most points per game (111.7) with the second-highest field goal rate allowed (47.7%). It’s played a significant role in the team’s slow start and was even more apparent in Saturday’s 145-117 loss to the Boston Celtics.

Unsurprisingly, after years of exercising extreme patience with the organization, The Athletic’s Shams Charania reported Monday that Lillard is becoming increasingly frustrated.

“The defensive struggles that led to Stotts’ dismissal have continued; the Blazers rank 30th in defensive rating. And in recent weeks, sources say Lillard has grown frustrated with the team’s play.”

But it’s not the only source of frustration for Lillard, who wanted this front office to add impact talent during the offseason. He’s averaging seven fewer points per game compared to last season (28.8) and his Offensive Rating (111) has dipped significantly after four consecutive seasons with an ORtg of 120-plus. 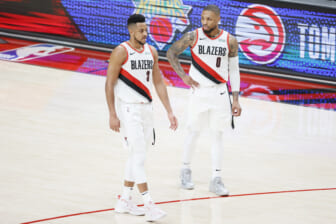 Specifically, per The Athletic, Lillard is bothered by Billups using the All-Star guard even than in the pick-and-rolls than Stotts did. It’s had a significant against on the team’s scoring, with his points per possession on the pick-and-rolls plummeting (1.073 to 0.883).

But Lillard isn’t the only player already having issues with Billups.

Billups, who is a head coach for the first time in his career, hasn’t been shy about blasting many of that team’s players this season. Following the blowout loss in Boston, he took direct aim at Portland’s starting lineup

Two days after Billups’ latest public criticisms, Charania reported Monday that tensions are on the rise between Portland’s head coach and players.

In terms of whether or not this will lead to change, nothing appears imminent. Lillard is reportedly willing to give the organization time to find a new leader in the front office. But he wants to see a commitment to making this team a legitimate contender.

“Lillard intends to give the Trail Blazers organization time to find its next leader of basketball operations. But beyond the front office component, the face of the franchise still wants significant changes to the roster.”

Once a new general manager is brought in, it’s fair to wonder whether the changes made in Portland result in Lillard or Billups leaving within the next year.