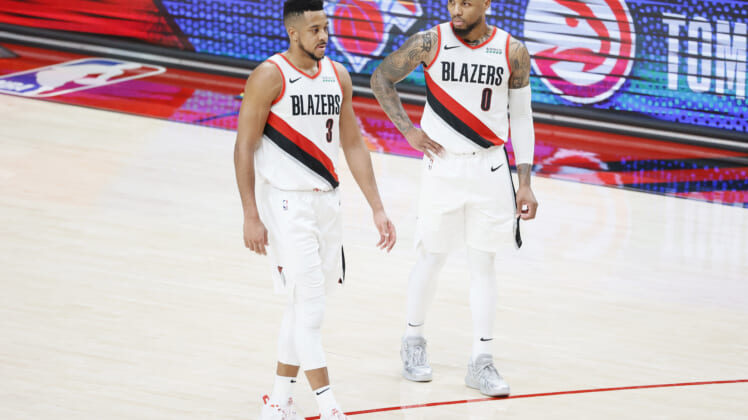 It’s reasonable to ponder whether Portland’s prolific backcourt duo is poised to be broken up before the NBA trade deadline given the change at head coach, president and general manager. It also doesn’t help that the Trail Blazers are 11-12 and were blown out at home against the 6-13 San Antonio Spurs on Thursday night, 114-83.

Chaos and uncertainty will cloud this organization until roster changes are made, but it’s in Portland’s best interest to ride it out with the talent in the building for the 2021-22 NBA season and take action in the offseason. Trading Lillard and/or McCollum in the midst of this mess would be impulsive.

Coming off an awful six-game first-round series loss to the Denver Nuggets, who were playing without Jamal Murray, the Trail Blazers decided to once again stick with their core while making a head-coaching change.

For better or worse, the Trail Blazers continue to give it their best shot in the Western Conference despite not winning a Conference Finals Game since 2000. In other words, the transition from Stotts to Billups was made to induce better results, similar to the Toronto Raptors firing Dwane Casey in favor of Nick Nurse in 2018.

Portland is off to a bad start under Billups, but it has also been just 23 games. Frequent playoff participants get off to slumping starts all the time. This is a team with continuity and plenty of capable scorers. They decided to stay the course with the talent at hand in the offseason. Why would they all of a sudden change course after a yawning start?

There’s also the element of weathering the storm, which Billups and friends have to do to an extreme degree at the moment. Olshey’s tenure has concluded due to a workplace misconduct investigation involving the Trail Blazers’ organization which comes after McGowan already stepped down. Now Billups is one of the most tenured members of the staff.

A vital part of any midseason move the Trail Blazers make is the fluid nature of their front office. Is the person who would make a trade tomorrow the same person who will be calling the shots at the 2022 NBA Draft? It doesn’t make sense for a team to make blockbuster trades with precarious and interim executives. Assemble a permanent front office and make the consequential roster decisions thereafter.

The Trail Blazers hired Billups because they believed he could get a different result out of their roster. Meanwhile, Lillard publicly endorsed the hire. There’s no way a team can get an accurate read on a head coach through 23 games.

Maybe as the season progresses, Billups gets this team to be a respectable defensive bunch? Perhaps the Trail Blazers become more cohesive offensively and therefore an overwhelming team on that end of the floor once again? By the way, Lillard and McCollum are off to uncharacteristic starts given their career scoring tendencies.

It’s fair to expect both players to shoot more efficiently in the coming months. We’re talking about two of the best scorers in the sport. Their trudging play of late isn’t going to last. Plus, Lillard is recovering from an abdominal injury. Maybe his underwhelming play is a result of the injury?

The early returns on Billups are a gray area because there’s not enough to assess him on. He was brought in to add a new perspective to a deep-rooted roster. If Portland fails to get past the first round of the playoffs or misses the postseason altogether, then begin the selling spree.

If and when the Trail Blazers decide to pull the plug, they will get everything they want in a trade and have a plethora of teams calling to make a deal. You can be sure that the Philadelphia 76ers, New York Knicks and Boston Celtics will make a push to acquire one of Lillard and McCollum. Then there’s teams who could show interest in McCollum to help accelerate their rebuild like the Cleveland Cavaliers, Detroit Pistons and New Orleans Pelicans.

Blockbuster midseason trades don’t immediately yield the results the team acquiring the star seeks. Why? A significant rotation shakeup in-season affects team chemistry, as it takes time for everyone to get on the same page.

The Knicks acquiring Carmelo Anthony in 2011, the Miami Heat acquiring Goran Dragic in 2015 and the Chicago Bulls acquiring Nikola Vucevic last season are examples of teams making premier trades that didn’t boost their championship hopes in the season they made the move. It took the ensuing training camp and season for the individual arrivals to make a tangible difference. In other words, teams may offer a bit less to acquire Lillard and McCollum in February than they would in the offseason.

Portland isn’t up against the clock to make a trade. They’re getting multiple first-round draft picks and former lottery selections for their stars. The Trail Blazers making these moves in the offseason allows them to have an entire offseason and training camp to get their new-look team acclimated with itself.

The Trail Blazers have likely peaked, but it serves no purpose for them to end the Lillard-McCollum era over the next three months. Play out the season, allow Billups to establish a coaching identity and cash in on the two stars in offseason trades.