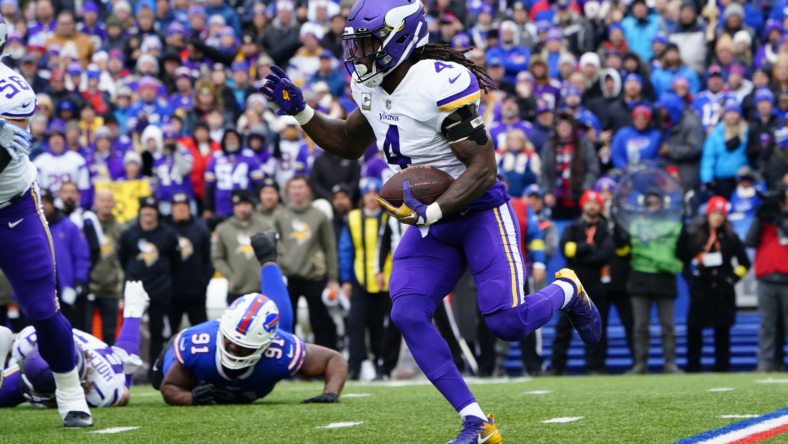 The Minnesota Vikings are on the road, taking on the Buffalo Bills in what’s been dubbed the “Cook-Off”, by the families of Dalvin Cook and James Cook. These two running backs play for the Vikings and the Bills, but it’s the first time the two siblings have ever played each other’s team at the NFL level.

Naturally, a large collection of the Cook family, who hails from Florida, is on hand for a brisk afternoon of football between two of the NFL’s best teams by record.

While James is largely a backup in his rookie season with the Bills, Dalvin has been the starting tailback in Minnesota ever since 2017, when he was the 41st overall pick by the Vikings.

Dalvin Cook emerges from the slow cooker to roast the Bills

Dalvin may have just had six carries for 13 yards through three quarters, but it was the seventh tote that changed the game for a bit.

Just when you thought the Vikings were down and out, Cook found a crease and took a carry 81 yards to the house to put the game within two scores. It is the longest play of Cook’s NFL career.

For Minnesota, it carved out a bit of hope, keeping the Vikings in reaching distance for a bit longer. It may be too little, too late for the Vikings after Kirk Cousins threw two interceptions, along with Josh Allen doing his thing, but it’s a start.

Cook now is up to six rushing touchdowns in what’s been a bit of a down season, with his touches getting reduced as Justin Jefferson becomes a true superstar. Still, this is a fun matchup. Hopefully, it won’t be the last time the NFL produces a “Cook-Off.”