The reigning Super Bowl champion Tampa Bay Buccaneers will host the Dallas Cowboys to kick off Week 1 of the 2021 season's NFL schedule.

In advance of Wednesday’s full NFL schedule reveal, it was announced that the reigning Super Bowl champion Tampa Bay Buccaneers will host the Dallas Cowboys to kick off Week 1 of the 2021 season.

It should be an epic showdown between two productive offenses, but the Bucs’ exceptional defense that played a big part in its championship run

Of course, though, much of the conversation will inevitably revolve around the quarterback position.

Tom Brady is the GOAT of all QBs, and even as he’s about to turn 44 in August, there’s not really a sense that he’s slowing down yet. Brady can still make all the throws, has an elite football IQ and is surrounded by tons of playmakers.

While Dallas’ defense may be too rookie-dependent to stop TB12 and Co., Cowboys fans can at least take solace in the fact that their signal-caller, Dak Prescott, should be fully healthy from the major ankle injury that cut his 2020 campaign short.

Before Prescott went down, he was balling out in the midst of an otherwise disappointing maiden year at the helm for Dallas head coach Mike McCarthy. Prescott was averaging 371 yards passing per game last year across five starts.

The injury situation made Prescott’s long-term contract situation more complicated. Eventually, though, Cowboys owner Jerry Jones did the right thing and gave Prescott that massive payday this offseason, which brought about a sense of peace around America’s Team. 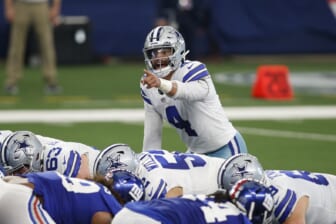 Whatever happens, this is an exciting matchup between two high-level quarterbacks, and will be a huge shot of momentum in the early going. With an expanded schedule now including a 17th regular-season game, having a longer rest before Week 2 will benefit both these teams.

If the Bucs start their championship defense with a “W”, it’s even better. Should the Cowboys find a way to pull the upset, though, their bid to seize the NFC East crown will be off to a roaring start.