The days of two-way players in the NFL have largely faded unless you happen to be Patrick Ricard or play for the New England Patriots. Despite it being rare, that hasn’t stopped Atlanta Falcons running back/wide receiver/kick returner Cordarrelle Patterson from campaigning to see some defensive snaps.

He’s shown interest in the past and with the Falcons already eliminated from playoff contention, they don’t have anything to play for in Week 18.

Because of the situation, Patterson would like to play free safety for the team on Sunday. He took to Twitter to make it known to Falcons defensive coordinator Dean Pees.

It’s not a crazy thought and we could actually see Patterson in the defensive backfield for once instead of terrorizing defenders as he typically does from the offensive backfield. While he’s best with the ball in his hands, should he get a hold of an interception, good luck to any offense trying to bring him down.

Cordarrelle Patterson has defensive goals too

Though he’s already accomplished a lot in the NFL throughout his nine-year career, the explosive athlete recently spoke of one other achievement he’d like to knock off his bucket list.

For what it’s worth, the Falcons’ official team depth chart had Patterson listed as a backup free safety for their Week 13 matchup. He also got one snap on defense against the Jacksonville Jaguars in Week 12.

DC Pees has also mentioned that he does indeed have a “Patterson package” in his defensive playbook, lending more credibility to the idea.

Honestly, it’s the last week of the regular season, why not stick Patterson back there for a few plays and let him have some fun? Although some of the actual defensive backs on the team may not be thrilled with the idea of losing playing time to an established offensive player, it could provide some additional excitement on game day. 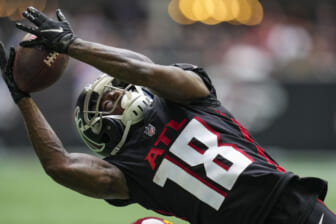 Also Read:
Away from team, Calvin Ridley could want trade from Atlanta Falcons