Away from team, Calvin Ridley could want trade from Atlanta Falcons

The case of Atlanta Falcons star wide receiver Calvin Ridley this season has been a curious one. In Week 5, Ridley was out with an undisclosed personal issue. Ridley returned in Week 7 after their bye the week prior, but it was the last game he played this season.

On Oct. 31, Ridley announced he was stepping away from football to focus on his mental well-being. Neither his head coach Arthur Smith, nor the team has provided an update since.

However, on Thursday, Steve Wyche of the NFL Network speculated the possibility of Ridley wanting to be traded from the Falcons.

Calvin Ridley may be ready for change of scenery

It’s certainly possible that’s the main issue here. Maybe Calvin Ridley simply wants a new situation. The Falcons have been going through the motions with Matt Ryan the past few seasons, changing coaches and still not having any more success.

Meanwhile, Ridley, 27, is used to winning. At Alabama, Ridley won two College Football National Championships. In the NFL, Ridley has yet to be a part of a winning team, with the Falcons finishing no better than 7-9 in his four seasons with the team.

Pure speculation here, but maybe Ridley wants to play closer to home. He was born and raised in Florida and it’s possible he’d prefer to play for one of the three teams located in his home state.

No, I’m not saying the division rival Tampa Bay Buccaneers will easily scoop him up to replace Chris Godwin or Antonio Brown, but playing in Miami with Tua Tagovailoa or Deshaun Watson may intrigue him. Or, getting a chance to help Trevor Lawrence thrive in Jacksonville. Either way, the possibility of playing with a franchise quarterback who has yet to peak may be more enticing than playing out the string with the remainder of Matty Ice’s career in Atlanta.

Should Ridley demand a trade this offseason, there will be a large market for his services. In that event, teams may want to speak with him first in an effort to uncover any other possible areas of discontent.

Did Ridley step away from football because he didn’t want to be a Falcon for whatever reason? Or is he still working on overcoming the personal matters he initially stepped away from football for? That’s a question Ridley will undoubtedly have to answer as he prepares for the 2022 NFL season. In the end, football or not, we hope Ridley is in a good place in his life as there are far bigger, more important things than the game of football. 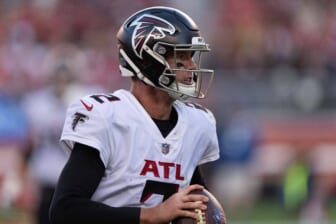