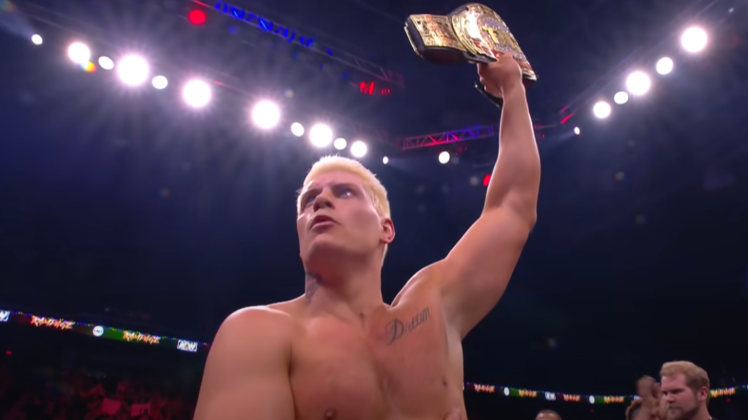 The possibility of Cody Rhodes leaving AEW and making a return to WWE seems to be as strong as ever, after AEW CEO and President Tony Khan officially said goodbye to his executive vice president on Tuesday morning.

It has been public knowledge for quite some time that the 36-year-old co-founder of AEW has been competing for the promotion without a contract. The original three-year deal he signed when the organization was formed ended at the end of 2021, and the Go Big Show judge has appeared on broadcasts of AEW Dynamite and AEW Rampage nonetheless.

In recent comments during interviews or promos inside the ring, Rhodes has never given a hint that his future wrestling home would be anywhere else but AEW. However, during a recent edition of Wrestling Observer Radio, veteran professional wrestling reporter Dave Meltzer suggested things may have changed when it comes to Rhodes returning to AEW, and his former employer the WWE could be in play for his services.

“He still has not signed [with AEW], and originally when he hadn’t signed, it just seemed like one of those things, but now here we are — we’re in mid-February, the contract was up at the end of December, or maybe January 1,” Meltzer explained [h/t WrestleTalk.com. “But yes, a lot of talk about Cody Rhodes, and it is probably best said that… before, I would say that there was minimal possibility that he wasn’t gonna sign [with AEW], but I would not say that now. I think there’s a lot of people that think that it is up in the air of what is going to happen next.

“At this point, I’m presuming that I’m not gonna hear from him until the decision’s made and he wants it out. He’s got two shows on WarnerMedia, he’s got Rhodes To The Top and he’s got Go Big Show which is filming. And Rhodes To The Top was renewed for a second season, so that is a good reason to stay with the WarnerMedia family. But at the same time, he has not signed, and in WWE, they thought that there was a good chance, or a chance, something. It was definitely something that was talked about today in certain circles — about the potential of something happening there.”

On Monday morning, the situation took a major turn when AEW’s Twitter released a letter penned by CEO and President Tony Khan. The promotion general manager, head of creative, and overlord thanked Rhodes and his wife Brandi Rhodes — who serves as AEW’s Chief Brand Officer — for their contributions to the promotion and also wanted to “wish them both the best as they move on from AEW.”

“Cody and Brandi Rhodes were integral to the launch of All Elite Wrestling. Cody’s ability combined with his boldness and his passion for our industry and his love for community outreach helped AEW deliver on our mission to give fans what they needed for far too long — something new, innovative and lasting,” Khan wrote.

“Brandi helped us shape the AEW story, and I appreciate how hard she fought for us both in the ring and out of the ring, competing in the women’s division while advancing our efforts at inclusion and civic causes, including great partnerships with Kulture City and the American Heart Association.

Rhodes made his WWE debut in 2010 as a second-generation performer and the son of pro wrestling icon Dusty Rhodes. Rhodes won a plethora of titles during his tenure, including the tag team and intercontinental titles. He asked for his release in 2016 following a bizarre run as the eccentric character known as Stardust.

Rhodes would go on to rebuild his brand competing for Ring of Honor and New Japan Pro Wrestling, among many other independent promotions. He would become a major influencer in the industry, and the friendships he formed with fellow NJPW talents The Young Bucks, Kenny Omega, and Adam Page would set up the executive backbone of what would eventually become All Elite Wrestling.