The blockbuster trade for star quarterback Deshaun Watson and his ongoing legal situation will be a major storyline. The same thing can be said for former No. 1 pick Baker Mayfield, who still remains on the roster with camp opening.

With camp approaching, let’s preview the Browns summer in Berea, including some major storylines.

As noted above, camp will start July 27. The first practice open to public will be July 30. Camp will break August 19. Here’s the full schedule

Here is the history of where the Browns have held training camp over the years, via Pro Football Reference.

Can you go to Cleveland Browns training camp?

Yes. The first public practice will be July 30 with a total of 11 sessions enabling fans to be in attendance.

Any practice that’s open to the public will begin 2 p.m. local time. Fans can start reserving tickets on June 23 with season-ticket holders receiving access two days prior (June 21). Here are the open practices

Here are the top storylines and Browns’ position battles to follow in training camp this summer.

Cleveland traded for the troubled signal caller back in March, shortly after grand juries in Texas opted against recommending criminal charges against the quarterback. At that point, the three-time Pro Bowler was facing north of 20 allegations of sexual misconduct. In said deal, these Browns gave up three first-round picks and change to acquire the talented signal caller.

Fast forward roughly three months, and more women have come forward with allegations against Watson. It’s not a great situation for a Cleveland organization that was caught off guard by the new allegations.

The backdrop here is a likely suspension set to be handed down to Watson by the NFL under the guise of its personal conduct policy. Recent reports suggest that it could be a year-long suspension for Watson. This could force Cleveland to rely on Jacoby Brissett as its starter for the 2022 season. It will be a major storyline during Browns training camp if nothing comes out before July 27. 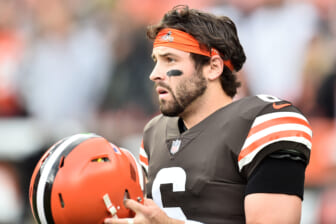 Figuring out what to do with Baker Mayfield

Another major storyline, Mayfield remains on the roster with abut a month to go before camp. After leading the Browns to a playoff spot in 2020, the former No. 1 pick dealt with major injuries as he regressed big time last season.

Most figured Mayfield would be dealt immediately after Cleveland acquired Watson. Due to his contract, that has not been the case. Right now, the Carolina Panthers are the only team seemingly interested in the signal caller. There’s absolutely no reason to believe Mayfield will attend camp even if he’s not dealt before players report.

Cleveland’s decision to trade for Cooper and his bloated contract was well received. The team gave up a mere late-round selection. With a history of success in Oakland and Big D, Cooper takes over as the Browns’ No. 1 receiver.

However, there’s a lot of question marks behind him following the release of Jarvis Landry. Donovan Peoples-Jones will likely start on the outside opposite Cooper. After that, it’s anyone’s best guess. Rookie David Bell will compete with Jakeem Grant, Ja’Marcus Bradley and Anthony Schwartz for playing time during camp.

If Bell fails to impress during training camp, there’s a chance Cleveland kicks the tires on other options. It has been linked to the likes of veterans Will Fuller and Julio Jones.