The Cleveland Browns are headed for one of the most difficult decisions in the 2022 NFL offseason. As a disappointing season comes to a close, with inconsistency and interceptions from Baker Mayfield part of the problem, general manager Andrew Berry and head coach Kevin Stefanski must address the quarterback position.

Heading into the summer, many viewed the Browns as Super Bowl contenders and a lucrative contract extension for Mayfield seemed likely. He was coming off a great run to close his 2020 season and this fall would give him a shot to prove he deserves to be one of the highest-paid quarterbacks in the NFL.

Instead, the Browns have taken a step backward. Following a season that saw Cleveland’s offense rank 9th in Football Outsiders’ Pass DVOA and 12th in passer rating (97.0), the Browns walked off the field on Christmas Day with another loss and more questions about Mayfield’s future. More struggles from Mayfield as the season draws to a conclusion has led to Cleveland being eliminated from playoff contention. 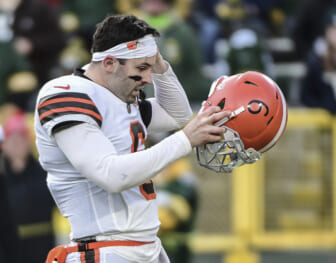 Las Vegas Raiders quarterback Derek Carr is the subject of trade rumors every offseason, with the organization seemingly always wanting to find a better option. With Carr in the last year of his deal and Las Vegas potentially bringing in both a new general manager and head coach, 2022 might finally be the time the veteran quarterback moves.

He enters Week 18 ranked fourth in passing yards (4,618), fifth in yards per attempt (7.8) and 10th in completion rate (69.2%). The advanced statistics, via Pro Football Focus, are just as impressive. Carr is 10th in passer rating when blitzed (99.2), passer rating from a clean pocket (108.1). For Cleveland, a team with one of the highest rates of play-action in the NFL, Carr’s 94.3 passer rating also stands out.

Cleveland could explore a deal attaching Mayfield with Day 2 picks, giving the Raiders a young quarterback to take a chance on with future assets attached. As for the Browns, they can compete for the AFC with Carr under center.

Baker Mayfield gets one last chance

Keeping Mayfield remains the likeliest option. Owed a fully-guaranteed salary ($18.858 million) in 2022, the former No.1 pick wouldn’t come close to being one of the highest-paid passers in football. With the financial flexibility created by the final year of a rookie contract, Cleveland could spend on a No. 1 wide receiver in free agency.

But there are many factors at play that should result in a real examination of whether or not Mayfield can be the guy. Injuries continue to be a problem for him and his style of play isn’t changing, making it even riskier to pay him $30-plus million a year. Pair that with his 48.78% completion rate and 59.7 passer rating on third downs this season and a 69.6 passer rating in the fourth quarter, finding a better option is possible.

Familiarity and Mayfield’s status as the former No. 1 overall pick might compel Cleveland to stand pat. But considering where the rest of this roster is at and how quickly contention windows can close, a quarterback change needs to be considered.

A play-caller and quarterback have a special connection. Stefanski took over as the Minnesota Vikings quarterbacks coach in 2017 and Kirk Cousins joined the team a year later. The two worked together one-on-one during that 2018 season before Stanski became full-time offensive coordinator, a coaching change that really helped Cousins.

We’ve seen Cousins sustain a high level of play ever since, taking what he learned from Stefanski and applying it to his game. The two-time Pro Bowl selection holds a stellar 101.3 passer rating and a 30-7 TD-INT ratio this season. He also boasts a 103.8 passer rating on third downs and a 98.1 passer rating in the fourth quarter.

With the Vikings seemingly prepared for big changes this offseason, Cousins might be a natural fit for the Cleveland Browns in an offseason trade.

The final option is dependent on what the Miami Dolphins do at quarterback. A Deshaun Watson trade is inevitable and it seems both he and the Dolphins want him coming to Miami. If the organization wants that superstar quarterback, that makes Tua Tagovailoa expendable.

Finally, we’re seeing signs of the player who merited the No. 5 pick in the 2020 NFL Draft. Since returning to the starting lineup on Nov. 11, following a multi-game absence due to injury, Tagovailoa is playing the best football in his young career. It’s even more impressive because it’s being accomplished with one of the worst offensive lines in the NFL.

Acquiring Tagovailoa would allow Cleveland to reset things, acquiring a quarterback entering the third year of his rookie contract. That means additional years to spend elsewhere on the roster and a chance that he could become the franchise quarterback in Cleveland. Plus, the Browns’ offensive line and play-calling would be a monumental upgrade for Tagovailoa.