Gonzaga big man Chet Holmgren is the most distinct player in the 2022 NBA Draft. The seven-footer does a little bit of everything. He’s an elite shot-blocker who’s nimble in the paint and has an efficient jump shot.

The nagging issue with Holmgren is his thin, 195-pound frame. Can he bang in the paint at the next level? One way or another, Holmgren is a premier prospect given his skill set, and he has the chance to become a franchise center.

Here are three ideal landing spots for Holmgren Thursday evening relative to where teams are selecting.

3. Chet Holmgren to the Houston Rockets

The Rockets are deep into a raw rebuild. If available at No. 3, Holmgren would be the best prospect and give head coach Stephen Silas more offensive variety.

Guard play is the best thing the Rockets have going for themselves. Jalen Green, the No. 2 pick in the 2021 NBA Draft, showcased the ability to be an explosive scorer and create his own shot in his rookie season. Kevin Porter Jr. has had his moments as a playmaker. The Rockets need more consistent scoring, though.

Holmgren gives Houston a versatile, do-it-all big man who would be a featured part of its offense and plug in the holes. He also gives them a rim protector, improving a young and lacking defensive team. With Houston having traded Christian Wood to the Mavericks, frontcourt becomes an obvious area of need.

Portland is looking to retool after a disastrous season. They missed the playoffs, Damian Lillard appeared in just 29 games due to an abdominal injury and CJ McCollum was traded. Trading up for Holmgren would be a savvy first step in righting the ship.

Selecting seventh, the Trail Blazers would have to move up at least a few spots to secure the Gonzaga product, which could come by including Nassir Little and/or future picks. Portland could justify this move, as Holmgren would add a new dimension to their offense.

Lillard, Anfernee Simons (working under the mindset that he re-signs with Portland this offseason), the recently-aquired Jerami Grant and Josh Hart make for a physical wing core that will be a force to be reckoned with on the offensive end. Holmgren would stretch the floor, benefit from the attention the aforementioned wings attract and anchor the paint defensively. He’d provide head coach Chauncey Billups with an offensive presence the Trail Blazers haven’t had at center.

In the short term, Holmgren is a complementary fit. Down the road, he could be a franchise talent. The factor that could stop Portland from trading up for Holmgren, though, is them preferring to flip their first-rounder and future picks for another proven player.

Oklahoma City needs to come out of the NBA offseason with at least one building block not named Shai Gilgeous-Alexander. Having the No. 2 pick and 19 first-rounders over the next seven years helps them accomplish that aim. Holmgren is perfect for the Thunder.

Wing depth is the strong suit of head coach Mark Daigneault’s rotation. Gilgeous-Alexander is a two-way star. Josh Giddey is a tremendous rebounder and passer. Luguentz Dort provides perimeter scoring. They need a frontcourt presence on the offensive end, which is where Holmgren comes into play.

Darius Bazley, Aleksej Pokusevski and Jeremiah Robinson-Earl have flashed scoring upside, but their success has been hot and cold. As a whole, this has been one of the worst offensive teams in the sport of late. Holmgren gives the Thunder much-needed outside shooting and someone to benefit from the double-teams that Gilgeous-Alexander draws. Furthermore, their offensive attack will be more balanced.

Holmgren is a no-brainer for the Thunder. He gives them a precise skill set that isn’t in their rotation and someone who will take some pressure off Gilgeous-Alexander. 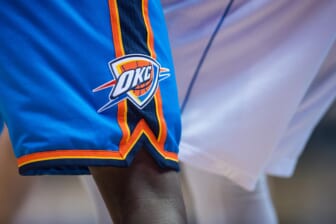