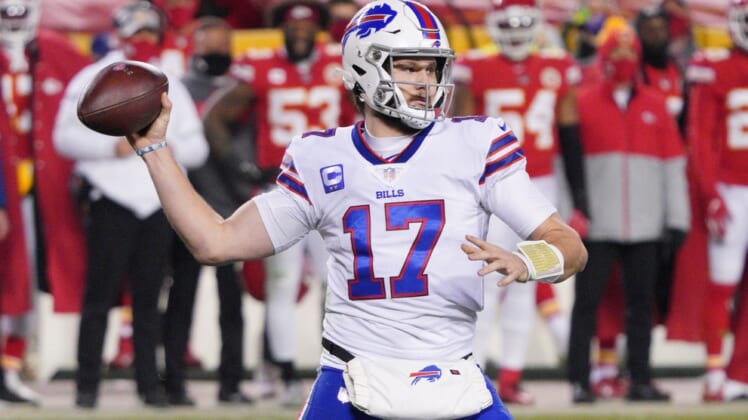 The Buffalo Bills ran all the way to the AFC Championship Game this past season, but to get over the hump and into the Super Bowl, they’ll need to be smart with their roster and would boost their Lombardi Trophy hopes with instant-impact picks near the top of the 2021 NFL Draft.

Thanks to the huge step forward quarterback Josh Allen took in his third year as a pro, Buffalo suddenly has a wide-open Super Bowl window. Will the Bills prioritize upgrading the rushing attack to complement Allen, bolster the trenches to better protect him, or upgrade the defense with their first few draft picks?

General manager Brandon Beane got the critical piece of the puzzle right by drafting Allen, and now it’s on him and the front office to maximize the signal-caller’s prime. Below is a look at Buffalo’s top 2021 draft picks and analyze prospects they’re most likely to target with those selections.

One glaring weakness Buffalo has is its lack of a running game. The Bills largely strayed away from even calling designed runs during their Divisional Round win over Baltimore, relying on Allen’s scrambling ability and the quick passing game to compensate for that.

While Allen is a unique athlete who’s built better than most to take big hits as a ball-carrier, that’s not the most sustainable long-term strategy. Allen has evolved into such an excellent pocket passer that he doesn’t need to put himself in harm’s way so much making plays with his legs.

Buffalo backs Devin Singletary and Zack Moss both don’t have the greatest top-end speed. Etienne is not lacking whatsoever in that area. The Clemson star gets north and south very quickly, has proven adept as a pass-catcher, and is more than capable of creating yards after contract, as PFF Draft underscores:

According to Pro Football Focus, the Bills finished 2020 with a top-10 offensive line. This suggests Buffalo didn’t get as much out of the ground game as it could have with a more explosive tailback of Etienne’s caliber.

Seldom is it recommended these days to bring in a rookie running back with such a premium draft asset. Etienne is a grand exception for a team that’s a piece or two away from playing in Super Bowl LVI.

Missouri’s Nick Bolton would form a gifted linebacker duo alongside Tremaine Edmunds, yet the Bills can wait to address that position in favor of upgrading the backfield talent at Allen’s disposal. Giving him Etienne as an additional supplement to an already-lethal passing attack will make Buffalo almost unstoppable.

Mayfield is more of a luxury pick who’d definitely be in the running to start Week 1 at right tackle, but as the PFF numbers suggest, offensive line isn’t as much of a need as it appears to be, particularly if a superior tailback starts in 2021.

LSU just seems to produce NFL defenders by the truckload, and Cox is the latest from that group. Listed at 6-foot-4, Cox has unique length for the position, which helps him disengage from blocks against the run and allows him to make plays even if he’s not quite taken the proper pursuit angles.

All that said, Cox isn’t a player who relies solely on athleticism to win the day. In the SEC, he showed he could excel dropping in coverage, recording three interceptions and five passes defensed in 10 games this past season. He’d be drafted higher if not for his one-year wonder status, and Buffalo would be glad to scoop him up in Round 2.

What make Washington and Wade interesting prospects to target here is their versatility. If the Bills want to get more creative on defense, they could drop Washington in at slot corner or as an extra linebacker/safety hybrid in the box because of his knack for flying to the football and his physicality.

Wade doesn’t make sense for a lot of teams inside the first two rounds, because he fell way short of expectations at Ohio State in 2020 after he was assumed to be a first-round pick. With the innate ability to play cornerback or safety, Wade is a versatile chess piece Buffalo could move around, and because of the lack of pressure to play right away, Wade could develop organically at the pro level, recover some of his lost confidence and thrive in Western New York.

Also to bear in mind is that Bills safety Micah Hyde is a free agent in 2022, so investing at the future of the position somewhere in this rookie class is a good idea.

Another forward-looking move here in Round 3 would be for Buffalo to invest in the future at defensive end. Jerry Hughes has one more year left on his contract, and while second-year player A.J. Epenesa is on the roster, it never hurts to build out depth at one of the most important positions on the field.

Tryon is an opt-out player who’s among the most volatile in terms of draft stock, but he’d present great value at this stage of the draft. Some believed him to be a first-round talent after his stellar 2019 campaign when he had 12.5 tackles for loss and eight sacks for the Huskies.

There aren’t many dynamic players at the tight end position on the Bills’ roster outside of Dawson Knox. For someone who should be a more lethal pass-catcher, Knox has only 52 receptions on 94 targets through two seasons as he continues to sort out chemistry with Allen.

In the case of Long, he’s a sure-handed catcher but is even more valuable as an in-line blocker. Long could compete for a starter’s share of snaps right away, which is all you can ask for from a third-round pick. He’d help out Buffalo’s rushing attack and diversify what play-caller Brian Daboll could dial up on early downs.

The Bills’ defensive tackle position features solid-but-not-spectacular players on the depth chart. Ed Oliver is still waiting to break out as he’s not lived up to his gaudy draft status to date, and for such a well-assembled coaching staff, taking a flier on a former 5-star recruit with Wilson’s abilities is an ideal, calculated risk to take to finish off Day 2 of the draft.

Etienne is a home-run threat and a home-run pick if Buffalo can manage to land him. The wear and tear at Clemson is a concern, yet Etienne hasn’t shown any major medical red flags to date and has proven durable despite a heavy workload.

The cases for drafting Cox and Long are pretty well outlined, but to get a little more in-depth, the former is going to help Edmunds a lot, as he struggles in pass coverage, while Long can get on the field at the same time as Knox to set up more diverse play-action passes and allow Daboll to throw more deceptive formations at opposing defenses.

Allen can drop back and sling it around the yard to the likes of Stefon Diggs, Cole Beasley and John Brown all day. Nevertheless, having someone like Long or another viable tight end who helps in run blocking and can be a sneaky weapon in the passing game opens up all kinds of possibilities — and ultimately will make Buffalo more balanced and less Allen-dependent.

These Bills seem destined for great things under head coach Sean McDermott. As long as Beane keeps providing McDermott and his staff with quality players trickling in through the draft, there’s no reason to discount Buffalo as the favorites to repeat as AFC East champions.