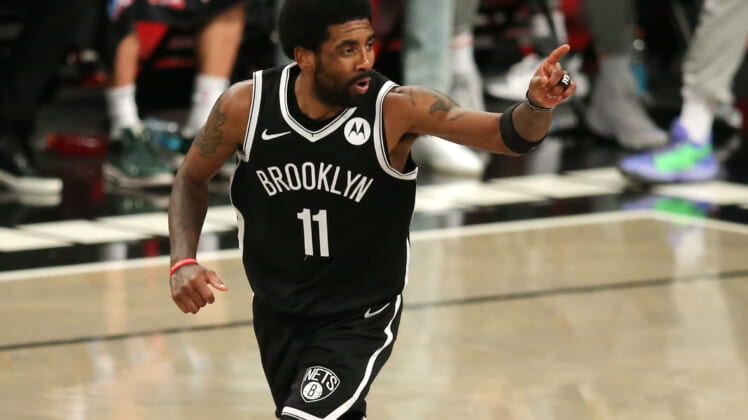 The Brooklyn Nets have been without star guard Kyrie Irving for their first two preseason games this fall. There’s also a darn good chance that the NBA champion will have to sit home games throughout the regular season.

Irving, 29, refuses to detail his vaccination status when it comes to COVID-19 — wanting to keep that personal. However, it’s the worst-kept secret in professional sports that he isn’t vaccinated.

This comes into play with local New York City pandemic mandates requiring proof of vaccine for large-scale indoor events, including NBA games at the Barclays Center in Brooklyn.

At this point, there’s no reason to believe Kyrie Irving will soon change his stance. Nets head coach Steve Nash touched on that during media availability on Sunday.

“I think we recognize he’s not playing home games,” head coach Steve Nash told reporters Sunday. “We’re going to have to for sure play without him this year. So it just depends on when, where and how much.”

This is pretty much the first time that an official within the Nets’ organization admitted what we all knew to be the case. The question now becomes whether Irving will play road games for Brooklyn starting with the team’s season opener against the defending champion Bucks in Milwaukee on Oct. 19.

Kyrie Irving to retire if traded

This comes on the heels of reports from Fox Sports’ Nick Wright indicating that Irving’s agent, Sam Permut of Roc Nation Sports, that the guard would retire if Brooklyn traded him.

That has become a real possibility with the Nets still deciding behind the scenes how to handle this unusual situation.

“The Brooklyn Nets remain unclear on All-Star guard Kyrie Irving’s ultimate intentions to get vaccinated and have made no decision on whether the organization will accommodate him as a part-time player this season,” ESPN’s Adrian Wojnarowski and Brian Windhorst reported recently.

The issue here is that Irving doesn’t necessarily have any trade value right now. The threat of retirement and his previous issues in Brooklyn both add another layer to this.

On the court, this is a big deal. The Nets are seen as one of the favorites to come away with the NBA title this season. While James Harden and Kevin Durant can shoulder the load, the absence of Irving in at least half of their games is a pretty big deal.

However, there’s also some pretty good news on this front. New York City just announced that Irving can take part in practices by deeming the Barclays Center as a private facility.

From a logistical perspective, the Nets open their regular season with consecutive road dates in Milwaukee and Philadelphia. They then take part in a six-game homestand before hitting the road for six more games. That certainly complicates things for Nash and Co.