We’re now entering another drama-filled season between Kyrie Irving and the Brooklyn Nets. This has become somewhat of a theme since he signed with the team ahead of the 2019-20 season.

This time, it’s all about Irving refusing to get the COVID-19 vaccine. In turn, the Nets have announced that Irving will not play or practice with the team until he either gets the vaccine or local New York City pandemic mandates are amended.

Meanwhile, rumors are persisting about a potential trade for a player that has little value on the market. As for Irving, his reps have threatened retirement if he is indeed traded.

That doesn’t change the possibility that a move could be had here should Irving change his stance. After all, we’re talking about a 29-year-old star guard who joined the rare 50-40-90 club while averaging 26.9 points, 4.8 rebounds and 6.0 assists a season ago. Below, we look at four blockbuster Kyrie Irving trade scenarios.

Related: Everything you need to know about the 2021-22 NBA season

We heard rumors all summer that Dallas was looking to move off Porzingis. That’s unlikely to have changed following the hiring of general manager Nico Harrison and head coach Jason Kidd. Neither have a built-in relationship with the big man. In reality, Irving also makes sense as a better fit next to Luka Doncic. He’d enable the MVP candidate to play more off the ball and give Doncic a true No. 2 scoring option.

From Brooklyn’s perspective, this is an example of Irving’s watered-down trade market. All things equal, and this isn’t a fair trade from an on-court perspective. But all things are not equal. At the very least, the Nets nab a talented big who can expand his game to the perimeter. It would make sense next to Kevin Durant in the frontcourt. They also acquire a backup point guard for Patty Mills.

Minnesota continues to be linked to Ben Simmons trade rumors heading into the 2021-22 season. Realistically, the headliner moving to Philadelphia in said deal would have to be D’Angelo Russell because of the finances. Despite there being no concrete rumors that Russell is on the block, the Wolves’ front office shake-up could have predated that.

Irving would obviously be an on-court upgrade over Russell next to stud young two-guard Anthony Edwards. That’s not even in question. As for the Nets, they bring back Russell after he entered super stardom with them back in 2018-19. He’d almost make too much sense for the championship contenders.

To say that things are not going swimmingly for the 76ers with Simmons as their “second option” behind Joel Embiid would be an understatement. Simmons has requested a trade from Philadelphia and continues to hold out while racking up large fines for games he’s missing. Meanwhile, there’s a question about his trade value after Sixers front office head Daryl Morey overplayed his hand this past summer. 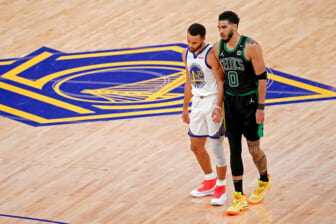 An Irving for Simmons swap would make sense for both teams. Kyrie would be much more of a natural fit with Embiid in that he can hit from distance and distribute. As for Simmons heading to Brooklyn, the Nets get that defensive-minded player who can suit up at the four next to Kevin Durant. In this scenario, Patty Mills starts at point guard.

Imagine this scenario. Irving heading back to the city he starred in for the first six seasons of his NBA career. This also really isn’t too far-fetched given that his decision to request a trade following the 2016-17 season had more to do with LeBron James being the face of the Cavaliers’ franchise. On the court, adding Irving to the mix to go with Darius Garland, Evan Mobley, Jarrett Allen and Lauri Markkanen would turn Cleveland into a legit playoff contender.

This also might be the best Brooklyn could hope for in a trade. It acquires a still-young score-first point guard in Sexton to team up with harden in the backcourt. Love could provide some stretch-five ability off the bench while Okoro represents major upside as a former top-10 pick.