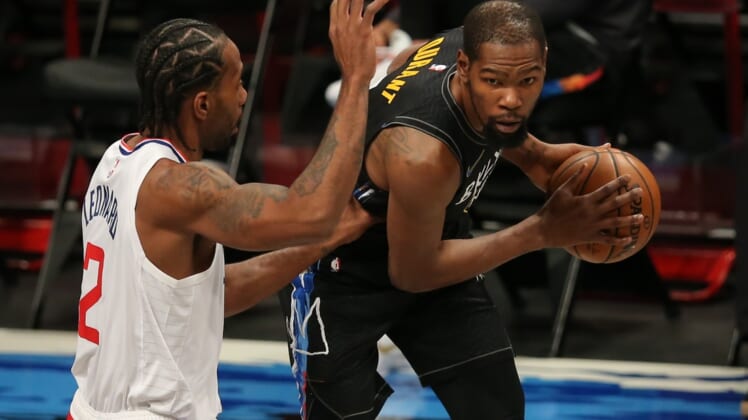 In a game that saw Durant not miss a beat, Brooklyn came out on top by the score of 134-117 in San Francisco. Durant dropped 20 points, grabbed five rebounds and dished out six assists. Unfortunately, the NBA MVP candidate will now miss some time due to an injury.

After missing all of last season due to an Achilles injury he suffered in the 2019 NBA Finals, Durant has remained relatively healthy throughout the 2020-21 campaign. He has missed nine games, but that’s due to the league’s COVID-19 protocols.

Despite the fact that he still boasts antibodies after contracting the virus last year, Durant has found himself on sidelined to COVID protocols twice this season.

When he’s on the court, the two-time NBA Finals MVP has been absolutely tremendous. Durant, 32, is averaging 29.0 points, 7.3 rebounds and 5.3 assists on 52% shooting from the field in his first 19 games as a member of the Nets. Brooklyn is 12-7 in those 19 games and 4-5 when Durant is sidelined.

With Kevin Durant out at least the next two games, Brooklyn will have to give it a go against the Sacramento Kings and Phoenix Suns as they continue their west coast trip.

The hope here is that KD will be back for Thursday’s huge game against LeBron James and the defending champion Los Angeles Lakers. However, there’s every reason to believe Brooklyn will play it safe with Durant.