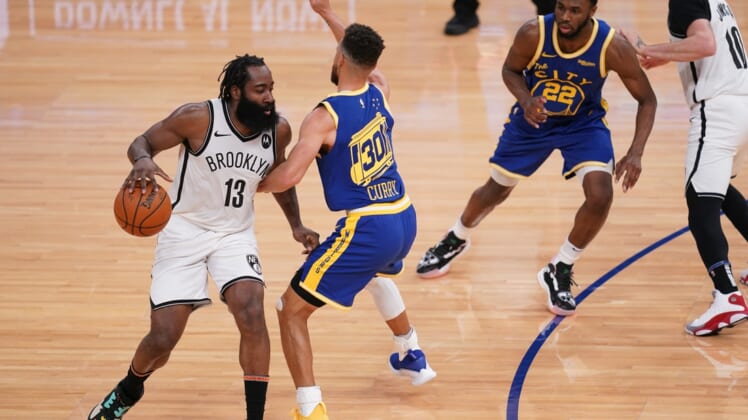 Kevin Durant scored 20 points in his return to the San Francisco Bay Area and Brooklyn’s “Big Three” were firing on all cylinders Saturday night as the Nets opened a Western Conference swing with a front-running, 134-117 victory over the host Golden State Warriors.

Kyrie Irving paced the Nets with 23 points, while James Harden complemented a game-high 16 assists with 19 points, helping Brooklyn complete a dominant season-series sweep from the Warriors.

The Nets crushed Golden State 125-99 in Brooklyn on Opening Night.

Stephen Curry led all scorers with 27 points, but shot just 2-for-9 on 3-pointers as the Warriors misfired on 25 of their 34 3-point attempts.

In the opener of a five-game trip, the Nets led by 15 at halftime, then busted the game open with a 42-point third quarter during which Irving had nine points and Durant eight, while Harden assisted on six buckets and bombed in a pair of 3-pointers of his own.

Harden went 5-for-8 on 3-pointers, while also finding time for a team-high eight rebounds and three steals.

Bruce Brown chipped in with 18 points, Joe Harris with 15 and Jeff Green with 14 for Brooklyn, which has won two straight after a three-game losing streak.

Andrew Wiggins and Kelly Oubre Jr. backed Curry with 17 points apiece for the Warriors, who saw a two-game winning streak come to an end.

Oubre completed a double-double with a game-high 10 rebounds.

Eric Paschall had 16 points and Kent Bazemore 11 for Golden State, which lost despite shooting 48.9 percent from the field.

Durant had 11 points and Harden 10 to go with eight assists in the first half, during which the Nets went up by as many as 16 points en route to a 66-51 advantage at the break.

The Warriors got a scare late in the second quarter when Draymond Green fell to the court grabbing at his right knee after attempting to defend a Durant 3-point attempt.

Golden State called a timeout, during which Green was able to get up on his own and walk to the locker room for further examination.

He was able to return for the second half.