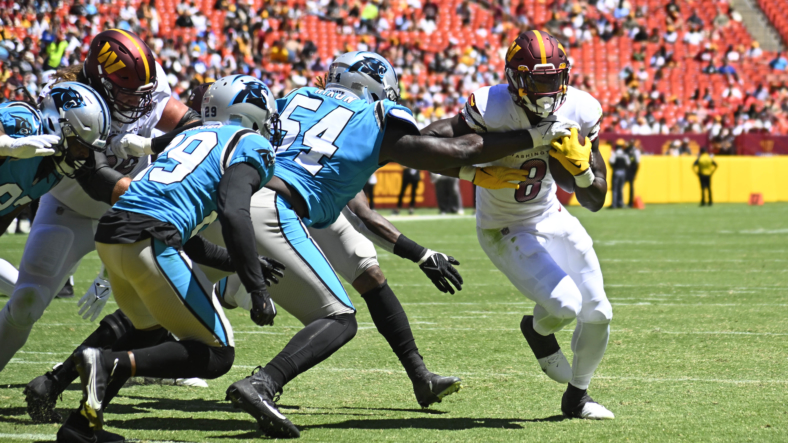 Washington Commanders running back Brian Robinson made the initial 53-man roster heading into the 2022 NFL season just days after he was shot multiple times in an attempted armed robbery.

Robinson Jr, a third-round pick in the 2022 NFL Draft, quickly became a standout at training camp. Heading into the final preseason game, analysts projected him as the Commanders’ starting running back. However, everything changed on the evening of Aug. 28 when he was shot twice in the lower body.

Team officials, including head coach Ron Rivera and several teammates, were able to see the 23-year-old at the hospital as he recovered. After doctors cleared him to go home on Monday, Rivera hinted that the rookie could still play in the upcoming season but everyone was just happy to see him leave the hospital.

While there is no definitive timetable for Robinson to return, Washington provided another positive update on Tuesday. With NFL teams required to move to a 53-man roster by this afternoon, Nicki Jhabvala of The Athletic notes that Robinson made the Commanders’ roster.

Washington’s official roster moves on Tuesday included the release of 25 players, with three others placed on the reserve/injured list. Not only is it notable that Robinson avoided being placed on the Non-Football Injury list – sidelining him four games – but the Commanders’ other transactions offer a reason for optimism.

The team released two running backs, including Jaret Patterson. As a rookie in 2021, Patterson racked up 266 rushing yards with an additional 73 receiving yards. With the 5-foot-8 running back kept off the roster, it’s a promising sign that Robinson could return within a few weeks.

It’s certainly the best-case scenario for the Commanders and Robinson. Whenever he is cleared to play, Washington likely won’t waste much time getting him involved with the offense. Considering the fears everyone had after news broke that he was shot multiple times, this is an incredible recovery and early good news for Washington’s season.