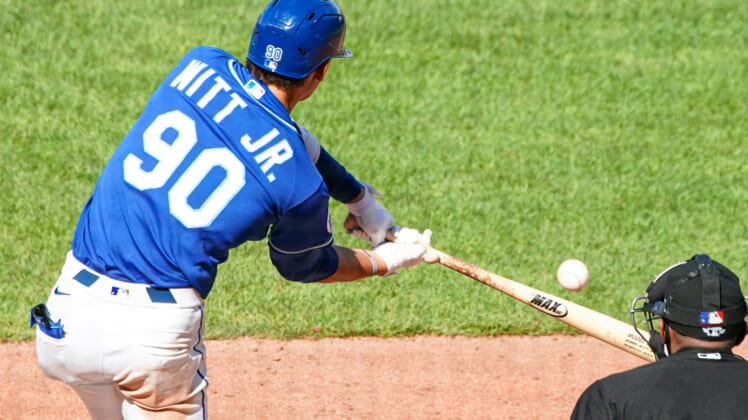 Kansas City made that official just a couple days ahead of their season opener against the American League Central rival Cleveland Guardians.

The No. 2 pick of the Royals back in 2019 out of Colleyville Heritage High School in Texas, Witt has been fast-tracked to the majors.

During spring training, it became rather clear that this next step in Witt’s progression wasn’t too big of a stage for the infielder. He hit .406 with three homers, 8 RBI and a .1223 OPS in 12 games for Kansas City.

MLB.com’s No. 1 prospect heading into the 2022 season, Witt Jr. will be Kansas City’s starting third baseman once Thursday afternoon comes calling in Missouri. Here’s what we can expect from Witt Jr. once he starts playing real games.

Look for Bobby Witt Jr. to hit near the top of the lineup

A shortstop by trade, Witt Jr. will be playing third to open things up with veteran Adalberto Mondesi playing short. Nicky Lopez will be at second for manager Mike Matheny.

In terms of the lineup, his ability to get on base should have Witt Jr. hitting second behind Whit Merrifield and right ahead of stud catcher Salvador Perez.

He also gets good lift through the zone, and that — combined with improved strength — helps him to project for plus-plus power. He has shown that additional pop while cutting his K rate down from 24 percent at Double-A to 22.5 percent at Triple-A.”

As you can see, the 2019 Gatorade National High School Player of the Year has shown ability to get on base. That’s going to be huge ahead of Perez and the likes of Andrew Benintendi as well as Carlos Santana in Kansas City’s lineup.

The Minor League Player of the Year following the 2021 season, Witt Jr. has proven that he can rake at every level he’s played. Here’s a dude who belted 17 homers and drove in 46 runs in just 63 games playing for Triple-A Omaha last season.

With protection both in front of him and behind him in the lineup, there’s no reason to believe Witt Jr. won’t see a ton of strikes early and often as a rookie. Given his ability to put the ball in play with power, it’s going to lead to some eye-opening stats.

As of right now, he has to be seen as the favorite to earn the American League Rookie of the Year award in 2022.

Witt will face his biggest competition from Julio Rodriguez, who also earned a spot on the Seattle Mariners’ Opening Day roster. One of the better-known prospects in baseball, Baltimore Orioles catcher Adley Rutschman could also be a top threat. However, he doesn’t have the threats around him that Bobby Witt has in Kansas City.

These Royals made the right decision in rostering Witt. The team isn’t going to contend this season in a top-heavy AL Central. The future is now. And in reality, he’s the face of this future. Look for that to happen sooner rather than later starting Thursday against the Guardians.