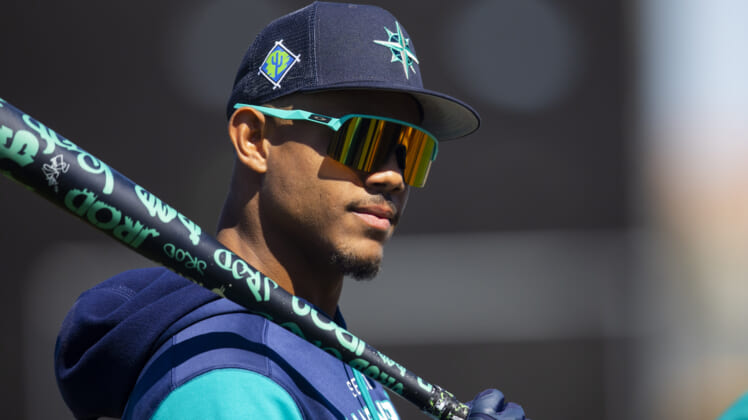 Julio Rodriguez will be in the Seattle Mariners lineup for Opening Day 2022, joining Spencer Torkelson and Bobby Witt Jr. as the latest top MLB prospects to earn a spot on their club’s 28-man roster to open the season.

The 21-year-old outfielder signed with the Mariners in July 2017 as an international free agent out of the Dominican Republic. Receiving a $1.75 million signing bonus at the time, he quickly ascended into becoming one of the most exciting players in the minors.

Rodriguez spent the 2021 season competing at the High-A and Double-A levels with Seattle’s minor-league affiliates. He also missed a portion of the MiLB season to play for the Dominican Republic’s national team in the 2020 Summer Olympics.

As the Mariners put the finishing touches on their Opening Day roster, the club announced Monday that Rodriguez will be a part of the team with his MLB debut set for Thursday, April 7 against the Minnesota Twins.

The right-handed slugger earned the roster spot, leading the Mariners with a 1.310 OPS, three home runs and 13 hits across 31 at-bats in spring training.

Baseball fans in Seattle should be elated about the arrival of Rodriguez. The 6-foot-3 outfielder boasts the talent to become the face of the Mariners’ franchise, offering an even higher ceiling than top prospect Jarred Kelenic.

In MLB Pipeline’s top-100 prospect rankings, Rodriguez ranked third behind Bobby Witt Jr. and Adley Rutschman. However, the gap between the three players is minimal with various outlets and analysts ranking the trio differently among the best prospects in the world.

After spring training, the Mariners saw enough. Rodriguez’s plate discipline, swing and approach are all ready to be in an MLB lineup. For understandable reasons, expectations will be high immediately.

In his prime, Rodriguez can be an MVP candidate who steals 20 bases, averages 30-plus home runs per season and hovers around a .300 batting average. As for the upcoming rookie campaign, he should have enough playing time to make a run at 20 home runs and a .270 batting average is within reach.