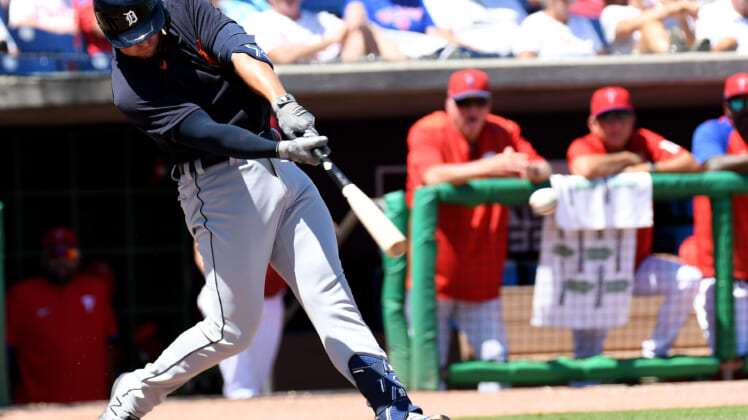 Detroit Tigers prospect Spencer Torkelson will be in the Opening Day lineup to begin the 2022 MLB season, becoming the first top prospect announced as part of his club’s 28-man roster.

Torkelson, the No. 1 pick in the 2020 MLB Draft, is one of the best prospects in baseball. Heading into the season, he rated as MLB Pipeline’s No. 4 overall prospect and he is also a top-five prospect by Baseball America.

Detroit brought Torkelson into major-league camp this year with a shot to earn a spot on the Opening Day roster. The 22-year-old compiled a .280/.406/.440 slash line with a .846 OPS and four doubles in 25 at-bats entering play on Saturday.

The Tigers took the opportunity to inform Torkelson of the news in a unique way. Future Hall of Famer Miguel Cabrera presented Torkelson with a first baseman’s glove, symbolizing the passing of the torch from the Tigers’ legend to the next potential superstar.

Cabrera will serve as Detroit’s designated hitter for the 2022 reason. He remains one of the highest paid MLB players entering his age-39 season.

The news isn’t all positive for the Tigers. Riley Greene, another top-10 prospect in Detroit’s farm system, was diagnosed with a fractured right foot. The young outfielder will be sidelined 6-8 weeks before receiving clearance for game action.

Torkelson is one of the most exciting, young hitters in baseball. The 6-foot-1 slugger was drafted as a third baseman by Detroit, but his natural position is first base. While he might never be a Gold Glove Award candidate at the position, the Tigers’ lineup is adding plenty of talent.

Both FanGraphs and MLB Pipeline put Torkelson’s power at a 70 on the 20-80 scale. Putting that number in perspective, 70 is viewed as a ‘plus plus’ tool with the batter having the raw strength to hit 35–plus home runs each season in his prime.

However, this isn’t a three-outcome player. Torkelson posted a .312/.330/.559 slash line when he opened the 2021 season with Detroit’s High-A affiliate. While the batting average dropped to .263 after he was promoted to Double-A, he still tallied 14 home runs and a .933 OPS in 50 games. The right-handed batter closed out his first full MiLB season with 11 home runs across 177 plate appearances for the Tigers’ Triple-A team.

There’s a legitimate chance Torkelson becomes a .270 hitter that averages 35-plus home runs with a .900-plus OPS during his best years in the majors. Given the upward trajectory the Tigers are making, it could make him an MVP candidate in a few short years.

Expectations for the 2022 season should be a bit lower. Considering he’ll receive regular playing time from Game 1 through Game 162, 25-plus home runs is doable for this talented player.